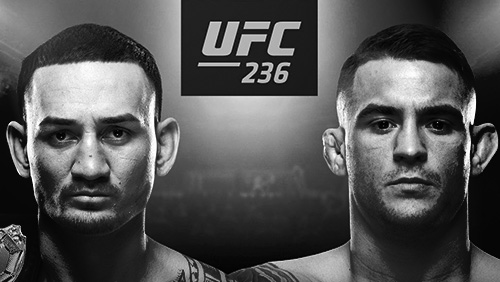 The UFC annually stages perhaps its best card of the year on the July 4 holiday weekend in the United States. That looks to be the case again this summer. The best card before that arrives this Saturday from State Farm Arena in Atlanta with two title fights headlining UFC 236.

The main event is for the lightweight title and a rematch between Americans Max Holloway and Dustin Poirier. Holloway is priced at -225 with Poirier at +175. This is a championship fight even though neither is currently the lightweight champion. That would be Khabib Nurmagomedov, but the Russian is currently suspended for his role in the post-fight brawl with Conor McGregor in October in which Khabib won the belt.

Thus, this is for the interim belt. Holloway (20-3) is the featherweight champion and ranked as the No. 4 pound-for-pound fighter overall by the UFC. “Blessed” has won 13 straight fights – the last four by TKO. Holloway’s last loss was to McGregor in August 2013. Holloway will keep his featherweight title regardless, but presumably would fight Khabib this fall if he wins Saturday.

Poirier (24-5) was reportedly the UFC’s second choice for this bout as the organization first offered Tony Ferguson the chance to fight Holloway. Poirier was to fight Nate Diaz last November but had to pull out due to injury. Thus, “the Diamond” hasn’t been in the Octagon since July 2018 when he beat Eddie Alvarez by second-round TKO (punches).

While Holloway-Poirier is a rematch, both guys are quite different from their February 2012 matchup at UFC 143, which Poirier won by first-round submission – the only submission loss of Holloway’s career and his UFC debut.

The co-main event from Atlanta features another interim title fight, this time at middleweight between Kelvin Gastelum and Nigerian Israel Adesanya (lives in New Zealand). The middleweight champion is Robert Whittaker, but he’s out a while after undergoing surgery for a hernia and collapsed bowel before he was to defend his belt at UFC 234 against Gastelum.

Adesanya (16-0) is the -175 favorite with that unbeaten record and comes off a February unanimous decision win over legendary but past his prime Anderson Silva. Gastelum (15-3), who is +145, comes off back-to-back wins over Ronaldo Souza and Michael Bisping but hasn’t fought since May 2018. The winner here should fight Whittaker later this summer, most likely in August.