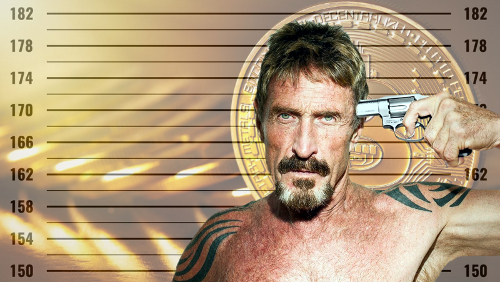 How desperate does the anti-scaling cryptocurrency community have to be to align itself with accused murderer John McAfee?

A few weeks ago, CoinGeek founder Calvin Ayre took a trip to Cuba, where, as he is wont to do, he posted some photos and videos of some lovely local ladies engaging in the popular posterior pumping art form known as twerking.

The youthful appearance of some of the dancers led some Twitter trolls to comment that Ayre – whose 58th birthday celebration will be part of the next CoinGeek Conference in Toronto on May 29-30 – was just too damn old to be hanging out with such fair flowers of Cuba’s feminine pulchritude.

Predictably, McAfee (pictured), founder of software firm McAfee Associates and serial advocate for any crypto startup that will pay him to tweet positive things about it, felt the need to add his voice to the discussion, claiming that Ayre was dragging the crypto community down “a dark alley.”

With respect, that’s a bit rich considering that last week a federal court in Florida ordered McAfee to pay $25m to the family of Gregory Faull, the man that McAfee was accused of murdering in Belize in 2012. If coming out on the wrong end of a wrongful death lawsuit isn’t enough, consider that the 74-year-old McAfee has a fondness for 17-year-old female companions, then decide for yourself whose alley appears darker.

Ayre’s lawyers are also making their own decisions, so McAfee and others who gleefully repeated his slander will soon understand that there’s a price to be paid for spreading disinformation, particularly when it’s done for commercial gain.

McAfee has nearly 1m Twitter followers, so the anti-scaling crypto crowd has been only too eager to egg him on, hoping that the mud he slings will soil not only Ayre, but also the Bitcoin SV protocol Ayre supports.

For the record, Ayre is someone with a reputation for building things, be it globally successful companies or the five-story office complex he’s currently constructing in his adopted homeland of Antigua. McAfee’s current mailing address is on a boat that is careful to not to stray into the territorial waters of the various jurisdictions from which McAfee is a fugitive from justice.

Ayre is putting his money where his mouth is, supporting Bitcoin’s global expansion via a major BSV mining operation. McAfee was recently turfed from the board of an altcoin he’d been flogging after publicly bragging about attempting sexual relations with a humpback whale.

Ayre enjoys a good red wine and the occasional cocktail, not to mention a cold beer when he takes guests out wakeboarding in Antigua’s Jolly Harbour. McAfee has given public tutorials on how to insert bath salts up one’s rectum for maximum psychoactive efficacy.

Seriously… Why are we still having this conversation?

Anyone wishing to have an intelligent conversation – particularly about BSV’s capacity to scale to address the needs of a truly global financial system – should tune out McAfee’s massive FUD and turn on to the massive on-chain scaling discussions going down at the CoinGeek Conference in Toronto on May 29-30.

One more thing, McAfee has publicly vowed to “eat my dick on national television” if Bitcoin BTC isn’t worth $1m per coin by 2020. Given the Segwit Coin’s current trajectory, McAfee is running out of time with which to use his procreative organ for something other than dietary sustenance.

Speaking of, having never contemplated consuming our own dicks, we can’t help but wonder what kind of wine goes well with schlong? Does dick count as red meat? If so, we think we’ve found a vintage that is perfectly appropriate for someone of McAfee’s character.