Sports gambling continues to push deeper into the gambling industry across the globe and the leading sports television network, ESPN, is putting its weight behind the activity. It has announced the launch of a new sports gambling show, the Daily Wager, which covers industry news and information. 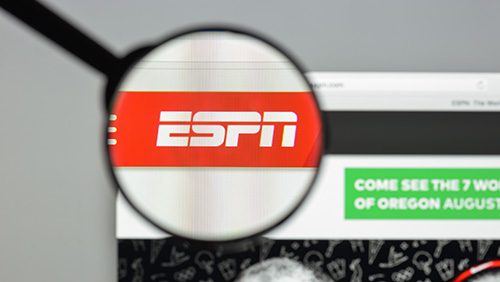 The show kicks off on March 11 and will be aired Monday through Friday. It is set to fill the 6 PM Eastern Time timeslot and will also be livestreamed on the ESPN app. Daily Wager will be filmed at ESPN’s studios in Bristol, Connecticut and will be hosted by ESPN’s sports betting analyst Doug Kezirian, the host of the “Behind the Bets with Doug Kezirian” podcast. The show will reportedly include sports gambling analysis and data, but is not designed to handicap sporting events.

According to ESPN Executive VP and Executive Editor of Studio Production Norby Williamson, “ESPN’s mission is to serve sports fans. The sports betting environment has changed and interest is increasing at unprecedented levels. ESPN is going to have a strong and vibrant presence across our platforms, and the launch of Daily Wager is the next step in what has already been underway for some time.”

ESPN began including sports gambling broadcasts not long after the U.S. Supreme Court reversed PASPA last May. It offers a number of podcasts and digital content, including its “Bad Beats” show, a segment that centers on some of the biggest losses and which is included on the network’s SportsCenter.

Bad Beats’ co-host “Stanford” Steve Coughlin will join Kezirian as a regular contributor. He will be featured alongside other familiar faces, such as Joe Fortenbaugh, David Purdum, Chris “The Bear” Fallica, Preston “Sports Cheetah” Johnson and Anita Marks. Other names will be included as the show develops.

The Daily Wager incorporates discussion and analysis on sports gambling with stats and information resources to produce a larger picture of the sports gambling industry. The screen will include graphics related to the activity in a ticker that includes news, information and lines, and industry experts will make picks, supported by ESPN reporters and analysts who will be providing insight, but no picks.