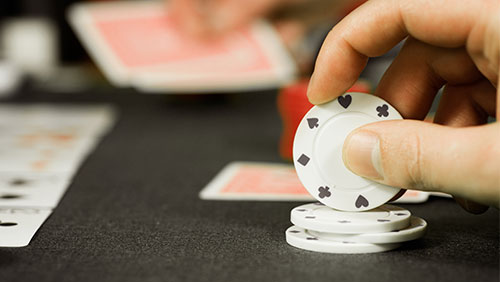 Another round-up from the US Poker Open with Sean Winter taking charge of the overall standings with victory in Event #4: $10,000 Short-Deck, his fourth successive final table.

Sean Winter earns a living playing in the biggest cash games in Las Vegas. There is no reverse gear. Winter’s goal is to send you to the junkyard, broke, hurting and with a scowl on your face.

The Las Vegas pro with the feral dog stare has earned more than $11.6m playing his second best format with close to half coming in a tumultuous 2018.

It’s like he parked at the top of the hill, and all he had to do was take the handbrake off.

Can anyone stop him?

Event #4: $10,000 Short-Deck at the 2019 US Poker Open attracted 42-entrants, and at the end of 14-Levels, Winter made his fourth successive final table, in a game he later admitted he was ‘figuring out on the fly.’

Winter went into Event #4 joint second in the overall leaderboard, level on points with Jordan Cristos, and 60-points behind the defending champion Stephen Chidwick.

Cristos’ absence from the final table meant that Winter would surpass him come what may, but Chidwick also made the final table, his third from four, to show how serious he is about defending his title.

If Winter was going to register his first US Poker Open victory, you felt that at some point he would have to deal with Chidwick, and it happened early when Winter’s pocket kings made light work of AsQc to send Chidwick out in sixth place.

Ben Yu was the next player to hit an air bagless rail after moving all-in holding KcQc only to be called and beaten by the Ac8h of Seth Davies. Ben Lamb began the final table as the short-stack, and arguably the most experience in this format after his trip to Jeju for the Triton Poker Series last term. Lamb did well to ladder up to the fourth position where Winter was waiting for him with a pair of kings. QhJc didn’t put up a good enough fight, and Lamb was out.

The man who began the final table with the chip lead was David Peters, and Seth Davies doubled through him AJ>A7 when three-handed, but didn’t fare as well when his AdJd met the Jc9c of Winter who flopped a two pair hand when all-in pre-flop.

Winter’s final table dominance gave him a close to 3:1 heads-up chip lead against the talented Peters and the former Global Poker Index (GPI) Player of the Year reduced the gap when his Qd9d cracked Winter’s pocket rockets.

The reaction from Winter was superb, winning back-to-back hands before pulling down the final curtain. Winter moved all-in holding Kc9c, and Peters made the call holding Jd9s. Winter flopped a pair of kings, and by the end of the turn and river, it remained the best hand.

Before the event took place, Winter told Poker Central’s Remko Rinkema that he still feels like he’s ‘under the radar’.