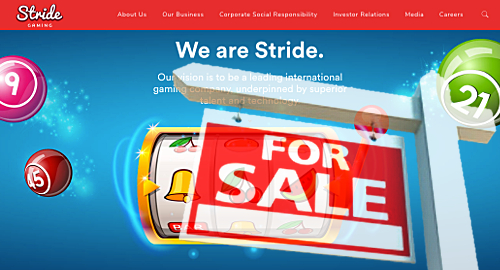 UK-listed online bingo and casino operator Stride Gaming has confirmed “press speculation” that the company is flogging its assets on the open market.

Over the weekend, the Sunday Times reported that Stride’s management had “put itself up for sale” and had engaged Investec Bank plc to “find a buyer.” On Monday, Stride issued a statement confirming that the company is “currently reviewing all strategic options in order to maximize value for its shareholders.”

Stride clarified that the options the company’s board are considering include a more aggressive UK and international organic expansion strategy, taking advantage of “disruption” caused by “fiscal and regulatory changes” to acquire some rival operators, and mulling whether to “participate in potential industry consolidation” by allowing itself to be acquired.

Under UK takeover rules, the announcement triggers the start of the mandatory ‘offer period.’ Stride plans to issue a further statement on its strategic review when it releases its interim results covering the six months to February 28, 2019 but reserved the right to scrap the strategic review process entirely and to reject any would-be buyer’s come-hither glances.

Last week saw Stride hold its annual general meeting, at which chairman Nigel Payne announced that the company was experiencing “challenging trading conditions” that would require the company to keep an even tighter eye on cost controls going forward.

Last November, Stride reported revenue rising 8.7% to £89m in the 12 months ending August 31, although earnings were down nearly one-fifth to £16.1m and the company booked a net loss of £5m.

Stride’s Monday announcement took issue with the Sunday Times’ claim that the company had been fined twice last year by the UK Gambling Commission (UKGC) for compliance failures. In fact, Stride’s Daub Alderney subsidiary was fined only once, but the £7.1m penalty issued last November was nearly twice the £4m that Stride announced it was setting aside in September to cover the expected penalty.