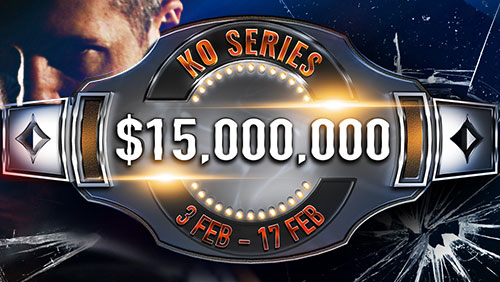 Three bites on the arm from partypoker including a new elite VIP program tier, SPIN & GO JACKPOTS get a lick of paint, and the KO Series gets underway with $15m in guaranteed prize money.

Adam Smith had this to say in The Theory of Moral Sentiments:

“The rich man glories in his riches because he feels that they naturally draw upon him the attention of the world. The poor man, on the contrary, is ashamed of his poverty. He feels that it places him out of the sight of mankind. To feel that we are taken no notice of necessarily disappoints the most ardent desires of human nature. The poor man goes out and comes in unheeded, and when in the midst of a crowd is in the same obscurity as if shut up in his own hovel. The man of rank and distinction, on the contrary, is observed by all the world. Everybody is eager to look at him. His actions are the objects of the public care. Scarce a word, scarce a gesture that fall from him will be neglected.”

partypoker is eager that we take a look at him.

The existing Diamond Club VIP program now has an elevator. Step inside, and it takes you to the Diamond Club Elite.

Currently, the people of rank and distinction that call the Diamond Club ‘home’ receive up to 50% cashback once they rake $100,000 across 12 months.

As of February 1, the new ‘Elite’ program, provides added value for those raking $200,000+, across the full spectrum of partypoker experiences.

Tom Waters, Managing Director, partypoker believes the new program is the “clear number one choice for VIP players in the online poker industry,” and a recent peek beneath the hoods of the equivalent programs at PokerStars, 888Poker and the new kid on the block, Run It Once Poker taken by Andrew Burnett over at HighstakesDB.com shows that Waters is spot on.

If you want to increase your rank and distinction, then you know where to go.

Adam Smith said that the “poor man is ashamed of his poverty, and feels like it places him out of sight of mankind.”

partypoker has a solution for the poor man to burn under the glare of the public eye.

The online poker room is crucifying SIT & GO JACKPOTS, and the new brand name SPINS will be resurrected. Nothing changes except for the title, but there is a little something to whet your appetite. For a limited period, you can turn $5 into $1m by competing in special edition ’Spins $1m.’

Here is a handy table to check out the likelihood of you hitting that 240,000 multipliers.

Last but not least, partypoker has an online series that makes everyone feel special, poor or rich, and that’s the KO Series.

It runs 3-17 February, and partypoker has increased the guarantee by 33% to $15m, across a record 437-events. All games are in the Progressive Knockout (PKO) format, and you can get involved across six tiers from Micro to Super High Roller with buy-ins ranging from $2.20 – $3,150.

You can find the full schedule, right here.

Here are the highlights.