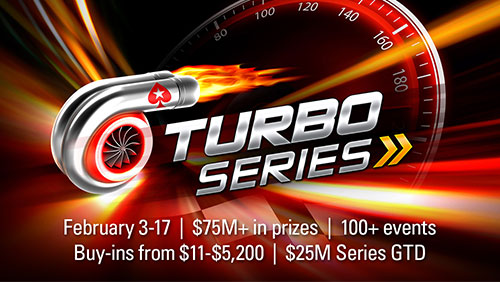 A combination of online tournament details including Pokerfuse declaring guarantees and dates for partypoker’s KO Series and Powerfest and PokerStars announcing a $25m GTD Turbo Series in February.

Everyone is watching to see what partypoker does next after a year that saw them host the richest-ever online tournament, but nobody is watching them closer than Pokerfuse.

Michael, Nick and the team have announced spare rib details of two of the three mixed grills that partypoker hope to serve during your Q1, 2019 sitting, including dates and guarantees.

The first big series for partypoker in 2019 will be The Knockout Series. The tournament series that fits the slipper designed for the pinkies of Progressive Knockout Tournaments (PKOs) runs February 3 – 17, and according to Pokerfuse scribe, Anu Arora, the team has hacked $5m off the draft guarantee, with $15m now up for grabs.

$15m is still a significant stretch goal after the November KO Series pulled in $11.4m.

The minutiae remains a secret for now.

The other big news concerns Powerfest. Arora reveals that the team has moved the ninth instalment of partypoker’s rattlesnake bite of a tournament series to March, and there will be a $20m guarantee on the tin.

What’s interesting about this information is the timing of the event.

I’m going to stick a wet thumb in the air and predict the decision comes after intel showed partypoker that the choice to pair dates with Stars helped the competition more than themselves.

The September edition paid out $70m across 699 events.

The one tournament series expected to run in Q1 for which Pokerfuse did not have any secret details to share was the low stakes behemoth The Monster Series. The only word on Pokerfuse street is that partypoker has changed the dates and guarantees twice (Feb – $2.5m GTD, and then Jan $2.5m GTD), and now nobody knows when the series will begin or how much partypoker will be putting on the line.

PokerStars has announced details of one Q1, 2019 event, and that’s the Turbo Series. The fast as f*ck tournament series takes place Feb 3 – 17, running alongside partypoker’s KO Series, and contains 114-events.

The buy-ins range between $11 and $5,200, and there will be $25m in guaranteed prize money, more than anything partypoker is intending to flash, according to the Pokerfuse piece.