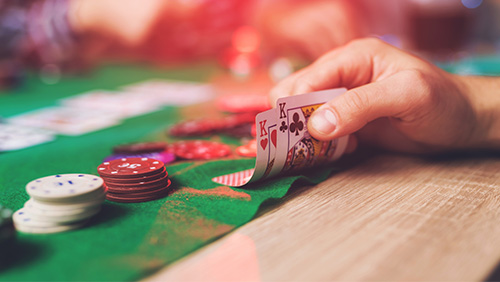 A round-up of action in the PokerStars World Championship of Online Poker (WCOOP) and partypoker’s POWERFEST including another significant win for probirs, two WCOOPs in a day for Nilsef, and three in a week for aDrENalin710.

I have a sunflower seed stuck in my front tooth. I keep sucking in air, trying to free it. The geezer next to me stares at my temple like a boxer who has heard the bell each time I make the irritable noise. At least I think it’s irritating as I can’t listen to it. I have my cans on and a chorus of kids hum Season Song by the Blue States.

Sunflower seeds, not so much.

I’m only eating them because of this ketogenic diet thing I am trying. Well, vegan keto thing, to be exact. I am starving. But it could be worse. I could be a professional poker player trying to go keto during September.

September is the time that all professional poker players need to be tip-top. Diet goes out of the window. Pot noodles fly in (I saw you, Jake Cody). Exercise consists of running to the toilet once an hour, and you have to turn on the gas and move every significant relationship into the oven.

I’m not judging the man (actually, I am), but two years ago, while his wife was giving birth to their second son, Deeb was winning his fourth World Championship of Online Poker (WCOOP) title.

So two years ago today I missed the birth of this guy for #wcoop and won a tourney that day this year i decided to do it again happy bday chance pic.twitter.com/NNEfFVP2xJ

It’s my daughter’s second birthday on the 27th.

I’m going to tell my missus I’m going to spend it writing shit like this. I wonder what she’ll say?

Deeb wasn’t the only person winning WCOOP gold these past few days. At the time of writing, 296,636 PokerStars players have whizzed through 72 tournaments, banking $28,811,023 in prize money. Nine winners have come from Brazil, with six emanating from the UK, Russia, and Germany.

It’s impossible to pick out a WCOOP star this week.

And then, if that wasn’t big-time enough for you, Denis “aDrENalin710” Strebkov won three titles in a week. The Russian created a new record for WCOOP titles won (7) after taking down the following events:

Jussi “calvin7v” Nevanlinna won an $11 buy-in NL 2-7 Single Draw event after beating 1,951 entrants to bank the $2,563 first prize. In May, Nevanlinna won the SCOOP Leaderboard to bag a Platinum Pass, no less.

The most significant win of the past few days ended up in the bank account of one Jorryt “The Cleaner11” Van Hoof. The former World Series of Poker (WSOP) Main Event third-place finisher won the $25,000 Pot-Limit Omaha High Roller for $465,559.91, his most significant online score to date.

From a festival promising $118m in guarantees to one offering $60m.

Partypoker’s POWERFEST had reached Day 5 by the time I switched on my laptop. Here are the most significant three winners of the past few days.

Andras “probirs” Nemeth continued his incredible year after taking down a $5,200 buy-in, $1m GTD Championship Event for $177,934 after cutting a heads-up deal with rdcrsnn.

Nemeth is having an outstanding year after winning the $25,000 No-Limit Hold’em High Roller at the PokerStars World Championship of Online Poker (WCOOP) for $576,087.

Then at the PokerStars European Poker Tour Barcelona, he beat 95 entrants to take down the €25,000 Single-Day No-Limit Hold’em High Roller for €605,600.