TAGs: big one for one drop, Leon Tsoukernik, WSOP

Leon Tsoukernik, casino owner and sometimes controversial poker player, decided to give up Vegas for Austria, and it seemed to be the right decision. Although he lost his $50,000 non-refundable deposit for the WSOP’s Big On 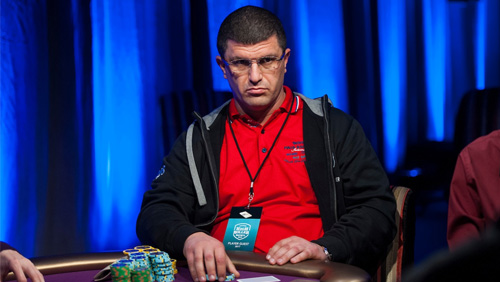 e for One Drop event, his participation in the EM European Poker Championship €25,650 Super High Roller (SHR) tournament brought him first place and a hefty amount of cash.

Tsoukernik, who owns Kings Casino in the Czech Republic, took a short hop to Casino Velden in Austria for the tournament. The event attracted 27 players, resulting in a prize pool of €1,025,000 ($1.19 million), factoring in the 17 rebuys that were recorded. By the time it was over, Tsoukernik emerged victorious, pocketing €370,000 (US$431,361). He has now amassed over $2.7 million in live action.

Tsoukernik said in a post-tournament interview, “I’m just a fan of this tournament. I have a very positive view on this casino which is an absolute jewel, a pearl, of the possibility how beautiful gaming could be in front of this fantastic lake.”

Probably being distracted by negative publicity surrounding his refusal to make good on a $2-million debt to fellow poker player Matt Kirk, Tsourkernik hasn’t won a major tournament since he took down the EPT Prague SHR a year and a half ago. That win was the second-largest of his career, netting him $782,453. He picked up his biggest pot last year after taking first in the SHR Bowl, for which he was awarded $1.8 million.

The final table saw Maxi Lehmanski, Manig Leoser, Tony G, Niki Jedlicka and Tsoukernik duking it out for position. Jedlicka was the first to fall after a failed attempt to bluff found him facing Tsoukernik’s two pair. He was given a prize of €85,000 ($99,000) for the effort.

Going into the final showdown, Tsoukernik and Loeser tossed some chips around before Loeser finally bit the bullet. An A-5-7 flop with two spades looked enticing to his 9-8 of spades and he went all-in. Unfortunately, he didn’t find a connector, and Tsoukernik took him down with Big Slick. Loeser pocketed €260,000 ($303,130) for his runner-up finish.