TAGs: big one for one drop, One Drop Foundation, WSOP

The countdown continues toward this year’s $1-million buy-in Big One for One Drop tournament. The WSOP event will be held at the Rio All-Suite Hotel & Casino in Las Vegas on July 15, and has already attracted a number of high rollers. There are a total of 48 spots available and, if they’re all filled, the prize pool will reach over $44 million. 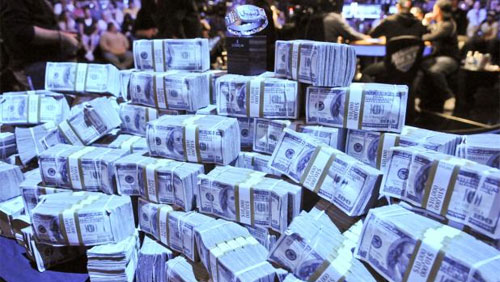 So far, 30 players have already signed up to participate. This will be the third year for the tournament, and several first-timers are getting themselves psyched up for the big game. Jason Koon, Adrian Mateos, Rainer Kempe, Bryn Kenney, Dominik Nitsche, Nick Petrangelo and Steffen Sontheimer are just a few of the players making their first-ever appearance.

While the list of names hasn’t been published yet, it’s uncertain if other notable high rollers such as Erik Seidel or John Morgan will participate. Brian Rast and Dan Cates, who have played in the past said they’re still on the fence. Rast told Poker News, “It’s great the tournament was set up to raise money for charity, I can respect and appreciate that. The first time it was a big success with a ton of non-professional players. Everyone was really happy with it.

“The second time ran with fewer amateur players and it didn’t even sell out. The Europe one was invite only. Now they’re doing it again and it looks like the tournament isn’t getting a great turnout. Frankly, I don’t think it’s something people are just still excited for from a poker perspective. It’s a big ask. I hope the tournament does well, but I don’t know whether or not I’m going to play from a poker business perspective.”

The tournament is run in conjunction with the non-profit group One Drop Foundation, which helps to provide safe drinking water across the globe. 8% of each $1-million buy-in goes to the organization, which means that it will receive $920,000 if the 48 spots are filled.

WSOP Tournament Director Jack Effel said of the event, “That a charitable poker tournament could have such an impact is simply astonishing. Since 2012, through 15 tournaments and player donations, over 12,000 individuals have contributed to raising over $20 million for the cause of access to safe water. This has had an incredible impact on the lives of over 170,000 people in need. Both from the poker and humanitarian aspects, the whole poker community and us at WSOP are lucky to be a part of this.”