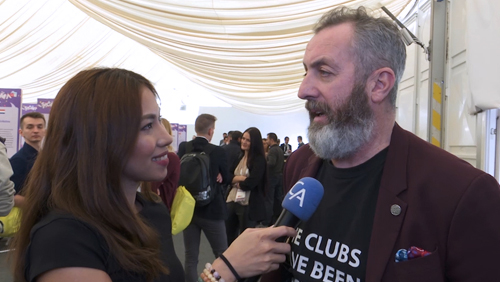 Monty Munford believes that Bitcoin can make the world a better place, and it’s the right fit for online gambling. The Forbes contributor recently spoke with CalvinAyre.com’s Stephanie Towers to talk about what looks good in the blockchain space, and the road ahead to mass adoption.

Munford has faith in Bitcoin because he wants the power taken away from the old guard. He told us, “I’m a believer in blockchain, I’m a believer in what it can do, in a lack of a centralized model, I think my bank has been ripping me off for 30 years.”

The online gambling sector can stand to benefit a lot from crpyptocurrencies, and Munford feels that it’s already primed and ready for more adoption. He said, “I think it’s massive. We’re [at] a gaming conference, I mean kids who are used to using currencies and in-game purchases, it’s definitely an extraordinary fit. I’m a believer of it changing society for the better.”

The biggest barrier to the further success of cryptocurrency adoption, as Munford sees it, is ignorance to the benefits. Munford explains:

“People don’t know what this is. For the uninitiated, it’s a channel for drug dealers and terrorists and everything about that, the dark web. This is clearly not what it is. It’s not mass adoption yet, and there are challenges such as the educative element to it all.”

Although the market has turned sour, Munford believes it will turn around. As it does, the broader public needs to see it not just as a method of investment. “You’ve got to educate people the positivity, of this, not movement, but the huge societal and cultural change,” he noted.

There are already positive applications of cryptocurrency, proving its benefit to the world. He notes that Philippine laborers working aboard are using cryptocurrency to send remittances home to their family and loved ones. He said, “The channel of crypto going from a wealthy area to an emerging area, and then that being seamlessly transferred into fiat, or mobile phone payments, I mean, I think that’s awesome.”

The best way to ultimately get that last domino to fall, and gain global adoption, is to find a more adult, level-headed approach to building the space. Religiously supporting a crypto, out of blind faith (or investor fandom) isn’t helping spread adoption to the greater public. He believes crypto should be promoted “in a secular and intelligent and slow and patient, smart way.”