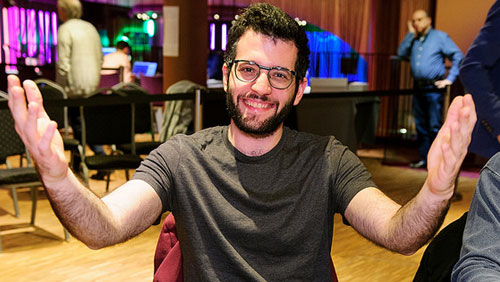 Three Aussie Millions stories combined into one with two side events victories and news that Jonathan Karamalikis joins the Australian Poker Hall of Fame.

A bent back caused by too many golf club memberships. A car horn full of harmonious madness milling through the mind. An inability to focus on the sweetest songs, with thoughts diving this way and that like a fly born and raised in Los Angeles.

Maybe Melbourne will be better?

Give me the car keys.

Last year, while you visited the hypnotist to cure your smoking habit, or when you bent down to lace up your shoe, or stood in front of the mirror, plucking grey hairs from your nostrils, Time Out magazine and Tapestry Research asked 15,000 people from 32 cities around the world to name the happiest city, and Melbourne came out on top.

Bouskila out-legged 336-entrants to bank the $58,160 first prize on a final table that looked as painful as a rifle butt to the head. It was his 14th live tournament victory, and his second Aussie Millions ring after beating 523-entrants to win an AUD 1,100 No-Limit Hold’em Six-Max back in 2013. In December, Bouskila beat 190-entrants to win a World Series of Poker Circuit (WSOPC) gold ring in Sydney. His most significant score to date came in 2013 when he finished 6/4407 in the World Series of Poker (WSOP) Seniors Event earning $117, 799.

Standing in his way in this one was the former WSOP final tablist, Dean Blatt, a trio of players who have pulled six-figure scores off the Macau poker tables in Jiwei Deng, Jack Wu and Ben Lai, and the Belgian Beast, Kenny Hallaert. This time last year, Hallaert had won the AUD 1,200 No-Limit Hold’em Turbo Shot Clock event, and finished runner-up in the AUD 2,500 No-Limit Hold’em Six-Max Shot-Clock event, amongst four ITM finishes.

But it was the inexperienced live tournament trotter, Bo Song, who made it to the end zone before falling on Bouskila’s sword. The runner-up finish, worth $37,121, was Song’s first ITM finish of his life.

Three other stars who went deeper than a missing button down the back of a sofa were Luke Marsh (10th), Sam Razavi (15th) and Aditya Sushant (25th).

The Greek God of Poker, Ioannis Angelou-Konstas, has taken down another tournament.

The final table included the former Goliath Phamous Poker Series side event winner, Gavin O’Rourke, and the man who won the 2011 Australia-New Zealand Poker Tour (ANZPT) Main Event in Perth, and the 2007 Asia-Pacific Poker Tour (APPT) Main Event in Sydney, Grant Levy. But it was Michael Fraser who tested Angelou-Konstas until the lemon wedge end, ultimately coming up short for the second time in a major tournament, after finishing second to Michael Kanaan in the 2017 WSOPC Main Event in Sydney.

Three other players who bought a lottery ticket in this one, and picked up more numbers than most were, Dara O’Kearney (18th), Michel Bourskila (21st), and James Romero (41st).

As is standard during the Aussie Millions another bastion of the Australian poker community has entered the Australian Poker Hall of Fame, and it’s Jonathan Karamalikis, the youngest ever player to do so.

Karamalikis has racked up $4.1m in live tournament earnings spanning a decade-plus in the business. Karamalikis has won titles in all the major Australasian live poker tournaments, and more than $6.5m playing online under the rather boastful title of Monster_Dong.

Speaking on his induction, Karamalikis thanked Joe Hachem for bestowing the honour on him saying, “It’s important to get recognition, especially with something that lasts forever.”