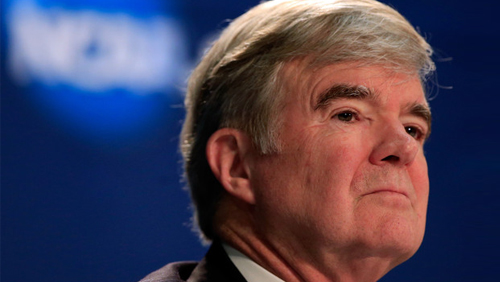 If you listen to NCAA President Mark Emmert, sports betting is a huge threat to his organization’s well-being. The Associated Press has reported on comments Emmert made at the NCAA’s annual convention in Orlando, Florida, and he continues to oppose legalized sports wagering, as well as the introduction of eSports to the college scene.

Emmert is specifically worried about the impact sports wagering will have on colleges. He said, “Sports wagering is going to have a dramatic impact on everything we do in college sports. It’s going to threaten the integrity of college sports in many ways unless we are willing to act boldly and strongly.”

The logic of how wagering could corrupt college sports is easy to deduce. If wagering on NCAA sports is offered, athletes could potentially make wagers on their own activities, which could potentially lead to match fixing. It’s a threatening problem specifically because the athletes are prohibited from earning profit from their play.

It’s also a very hypocritical stance from the NCAA. On average, an American college will earn $31.9 million yearly on their football team alone, none of which goes to the players. Even less popular sports, like women’s lacrosse, brings in $709,000 for the average college.

Emmert is also not a fan of adding esports to the NCAA calendar, at least not in its current form. He pointed out that adhering to Title IX rules, which forces gender equality in educational sports, would be difficult when a large majority of eSports competitors are male. Further, Emmert exaggerated the content of eSports, saying:

“We know a lot of the content is hugely misogynistic. We know that some of the content is really violent. We don’t particularly embrace games where the objective is to blow your opponent’s head off. We know there are serious concerns about health and wellness around those games.”

Marquette recently added eSports to their offerings, and Emmert will allow that bringing competitive gaming into the fold might have its advantages. He said, “We may have an opportunity in front of us to apply our values to esports and better align those games to our values to change not just what happens in our activities but what happens across your campuses and more broadly what happens in society.”

Based on the NCAA President’s comments, it doesn’t appear remarkable changes will be coming anytime soon to college sports. The world is changing, and Emmert just wishes it wouldn’t.