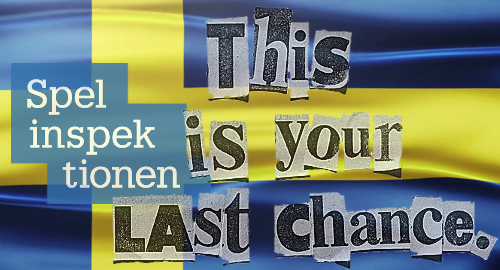 Sweden’s gambling regulator has publicly warned all its new online licensees that they need to comply with the new rules or else.

On Tuesday, Sweden’s Spelinspektionen regulatory body (formerly Lotteriinspektionen) made public a strongly worded letter it sent to the 66 companies approved to operate under the country’s new gambling regulations, which took effect on January 1.

The letter said Spelinspektionen had received “many complaints and tips on deficiencies in gaming companies in several different areas.” Chief among these faults is some licensees’ failure to check customers’ names against the new Spelpaus self-exclusion register before (a) permitting them to gamble, or (b) sending them promotional material inviting them to gamble.

Spelinspektionen also reminded its licensees that their websites need to prominently feature the Spelpaus logo (along with the regulator’s other two responsible gambling features) and ensure its link to the program is active. Any operator whose website has yet to institute these requirements needs to take action “immediately” or face the consequences.

Spelinspektionen warned that “there are no exceptions” to these requirements and transgressors could face financial penalties of up to 10% of a licensee’s turnover or the complete revocation of its new Swedish license.

This is the second time in as many weeks that Spelinspektionen has felt the need to publicly rebuke its new licensees for failing to honor the terms of their new permits.

A similar public scolding was issued January 14 following multiple reports in Swedish media about self-excluded players gaining access to Swedish-licensed gambling sites, while 11 sites – including Betsson, Bwin and Betsafe – were found to have sent marketing material to excluded players.

There likely won’t be a third warning, meaning whoever gets caught next coming up short in the compliance game is going to have to be made an example of in order to scare the others into line.

Ireland’s retail bookmakers to reopen on June 29, but will bettors risk it?
Steven Stradbrooke
9 hours Ago
.