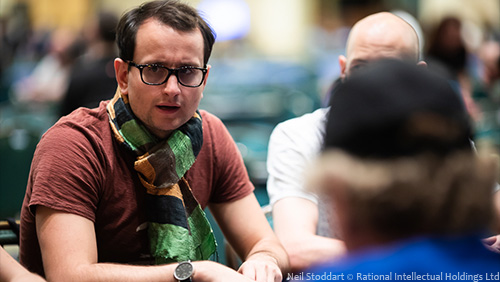 It’s the same with High Rollers.

Not long ago, a High Roller was a special treat. At the PokerStars Caribbean Adventure (PCA) they have become so blade of grass like they aren’t even called High Rollers.

As Rupi Kaur said in The Sun and Flowers:

Representation is vital otherwise the butterfly surrounded by a group of moths unable to see itself will keep trying to become the moth.

The event attracted 64-entrants, who thanks to the ‘unlimited re-entry’ format, bought in an additional 29 times.

The event contained all of the usual suspects, and despite 2018 hanging around in the rearview mirror, nothing has changed, with Rainer Kempe, Alex Foxen and Stephen Chidwick finding the groove of the final three places.

Kempe ended up in the end zone after dismantling the challenge of Stephen Chidwick bish, bash, bosh style.

The bish came after Chidwick opened to 175,000 from the button, and then called when Kempe shipped it holding QJo. Chidwick led with A6o, but the German flopped and turned trip jacks to survive. The bash came moments later when the pair got it in again, this time Kempe’s pocket eights holding against the A5o of the man from Deal. Then came the bosh when they once again tangoed, this time with Chidwick looking good when he got it in AQ v A7cc only for Kempe to flop a seven to send the former Global Poker Index (GPI) World #1 out of the contest.

Finding Kempe standing alone in the end zone was the current GPI #1 and 2018 GPI Player of the Year, Alex Foxen. I have no idea how long the heads-up action lasted, but know that the pair flipped for the title with Kempe winning 44>AQ.

It’s Kempe’s second score in the Bahamas after finishing 4/75 in the $25,000 Single Day High Roller, meaning he has banked more than a million bucks in the past few days. Kempe was one of the most successful players in 2018, earning $5.7m, and winning the GPI German Player of the Year. Kempe moves above Tom Marchese and Jonathan Duhamel to take the 24th spot in the All-Time Live Tournament Money Earned list with $18,387,738 in prize money.