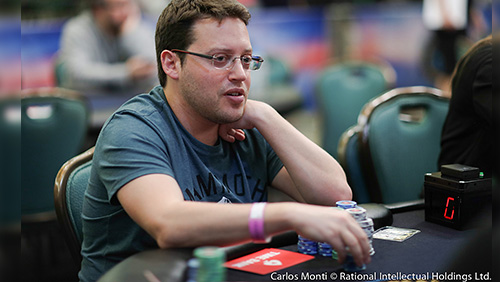 The PokerStars Player’s No-Limit Hold’em Championship flies through Day 3 like a bullet through the temple with Scott Baumstein leading the final 38-players and a whole host of stars waiting in the wings to trip him up.

It’s easy to make a mistake as a poker writer.

Isaac Haxton looks a lot like Isaac Hayes, and when the theme from Shaft gets into your head, the Super High Roller Bowl V winner doesn’t stand a chance.

In 2017, during the deep end of the World Series of Poker (WSOP) Main Event, when Scott Blumstein was pushing everyone into a one way elevator to Level Rail, I was so sure it was Scott Baumstein, I began to feel sorry for him when I realised the truth.

Day 3 is deader than a dead dog, and 38 players remain from 1,039, and sitting at the head of the chip counts looking like a shiny brass belt buckle is Scott Baumstein. I’ve checked. It’s the right one this time.

It was a day that saw the bubble burst like a bluebird does when you stick a straw into its mouth and blow very hard. I mean, come on, what do you do when you pick up pocket kings facing a three-bet?

You go for it.

The Englishman, Paul Leckey, did go for it, only to see the three bettor Tianle Wang pick up pocket aces. The dealer put five community cards on the board, none of them were regal, and Leckey was out.

PokerStars eased Leckey’s pain by giving the man a package for the European Poker Tour (EPT) in Monte Carlo, so now he has to worry about the price of a bottle of water and a ham baguette for the next four months.

Here’s a reminder of what they’re fighting for.

And the current state of affairs.

The Poker Gods have a limp sense of humour.