Home / Poker / 3 Barrels: Badziakouski has a patch; Payne has charity; Nicholson has a title 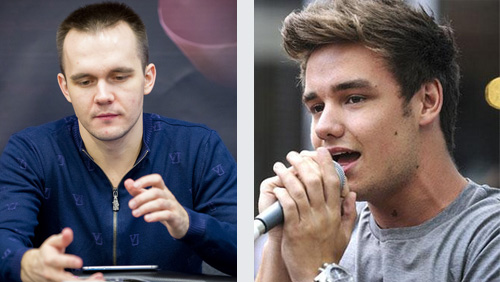 3: Barrels from the land of partypoker including Mikita Badziakouski wearing a patch at the PokerStars Player’s No-Limit Hold’em Championship, a partnership with the former One Direction star, Liam Payne, and a Grand Prix win for Bryan Nicholson.

There’s more than one online poker company operating in the world this week. Here are three tales from the face of partypoker, weaved together to make an almost perfect unibrow.

We start with Mikita Badziakouski, who is currently one of the hottest, and most experienced players left in the $25,000 buy-in PokerStars Player’s No-Limit Hold’em Championship (PSPC).

The Belarusian is wearing a partypoker patch, and word on Marvin’s grapevine is that Badziakouski is going to be the first new poker ambassador of 2019, with partypoker fortunate enough to snag his signature.

There are no dark shades, no hoodie – just a set of tools that earned him $14,563,871 in live tournament earnings last year, second only to Justin Bonomo, including back-to-back Triton Poker Series Main Event titles achieved across two continents.

If you’re going to put money on someone to win the $5.1m first prize in PokerStars’ most prestigious live tournament ever then, Badziakouski would be a good shout, and how interesting that would be if I turned out to be right, and a partypoker ambassador lifted that grand old golden PokerStars trophy.

We move swiftly on from one man who’s going to have to get comfortable having a microphone shoved in his face, to a man who likes to rub them into his crotch.

The online poker giant has linked up with the former One Direction star Liam Payne to run a partypoker LIVE sponsored charity event in aid of young cancer patients, struggling at University College London Hospital (UCLH).

Money from the event will go towards the building of a Proton Beam Therapy Centre, the likes of which is not currently available in the UK, and delivers high energy beams of protons instead of the x-rays used in conventional chemotherapy.

Our cigarette piece comes from the Green Isle Hotel in Dublin where Bryan Nicholson took down the partypoker LIVE Grand Prix. Details of the event are as scarce as a rectangle at a birthday party for 12-year-old circular twins, but we do know that he beat 2,159 entrants to bank €40,000.

The victory was incredible for Nicholson because in the past five years he has only finished ITM five times with his previous biggest score being €4,850 for a 51st place finish in the 2017 Irish Open Main Event. Although bear in mind that he may have only played those five tournaments in his entire life, and therefore, we need to whistle a different tune.