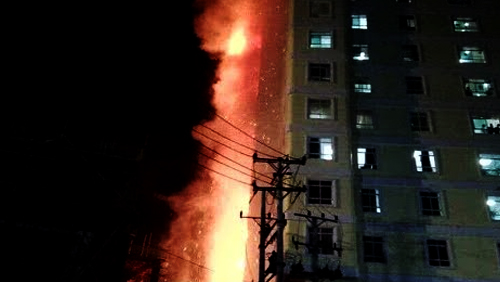 A Cambodian casino, popular with gamblers from neighboring Thailand, was the scene of massive fire yesterday. According to the media outlet The Nation, a fire broke out late in the day at the Genting Crown Casino (another news agency called it the Golden Casino) in Poipet, resulting in several injuries. The blaze reportedly started due to an electrical problem in an elevator.

Reports are still coming in, but the fire reportedly swept through an 18-floor building that housed the casino beginning at 9:35 last night. It began near the fourth floor before expanding quickly to the 13th floor. According to the chief of police of the Nanteay Meanchey province, Major General Ath Khem, “No one died in the flames. However, six men got injured due to smoke inhalation when they got trapped in the [elevator].” The fire was brought under control by 2 AM this morning.

The six were identified as five Cambodians and one Chinese national. All were sent to a local hospital for treatment from the smoke inhalation. 10 fire trucks, 3 of which belonged to the casino, were used to put out the fire.

Locals reported on the blaze, as well. A Twitter user, Emil Perera, said, “Huge blaze breaks out in the block of flats in casino city Poipet in Cambodia. A fire in Cambodia has ripped through 18 floors of a high rise block of flats. A report from the fire service states some people have been injured in the blaze.”

In user images uploaded online, flames can be shooting out of the side of the building, virtually from the ground up.

Poipet is the main land crossing and transport center for those traveling between Bangkok and Siem Reap. It is home to a number of casinos and because of its proximity to the Thailand border, and that country’s ban on gambling, is popular with Thai gamblers.

According to GGRAsia, the affected casino was, in fact, called the Genting Crown Casino. The news outlet stated that, according to a filing with the Hong Kong Stock Exchange in December 2017, Amax International Holdings Ltd, a former junket operator at the Greek Mythology Casino in Macau, announced that it was going to launch a VIP room in a casino by that name in Poipet. GGRAsia adds that the property had no connection to either Genting Bhd or Crown Resorts Ltd.