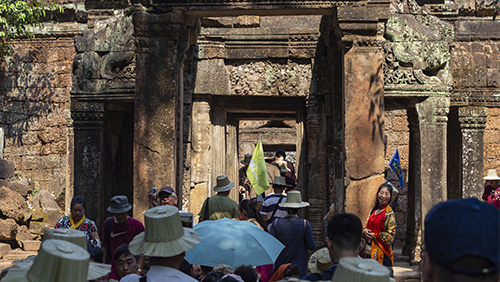 In its filing at the Hong Kong Stock Exchange, the company said that the shares in Howing Enterprises Co., Ltd, which holds the land, were sold by Wang Jiemin, also known as Wang Kitman, for $90 million.

A memorandum of understanding between the two parties had already been signed as early as June 6, 2014, when a $90-million refundable amount had been deposited.

Macau Legend is the operator of the Babylon and Legend Palace casinos in Macau, as well as one in Savan Legend Resorts Hotel and Entertainment Complex in Laos. The company said that the planned Siem Reap casino will allow it “to take part in and benefit from the tourism industry of Cambodia, which is important for the Group’s long-term development as well as the broadening of its revenue base.”

Aside from Cambodia, Macau Legend has been working to expand its operations, as partially funded by the sale of the Landmark Macau hotel-casino in November 2017. Among its plans is to develop a bungalow-type resort on land adjacent to Savan Legend; expand its Fisherman’s Wharf property on Macau’s peninsula; and construction of a casino resort in the Cape Verde archipelago to the west of Africa.

The Cambodian government has been working to make the country, which already houses over 60 licensed casinos, more inviting to operators. Relaxed rules and favorable tax rates are being used to sway businesses to invest and cater to tourists, particularly from China and Southeast Asian countries.

Macau junket operator Amax International Holdings announced it was partnering with Cheung Shing Global Travel Entertainment Ltd in the building and opening of a casino in Sihanoukville Province. In the same province, Sun City Group Holdings Limited has partnered with Golden Sun Sky Entertainment Co., Ltd. for building its own IR.