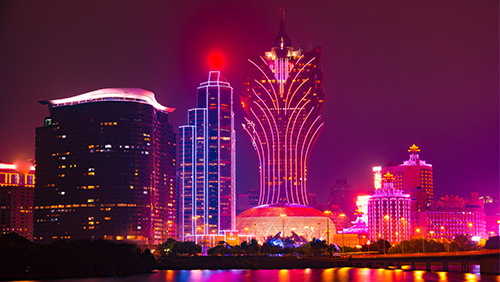 Even though demand in the gaming sector, on which the Special Administrative Region (SAR) is reliant on, is expected to temper, with uncertainty surrounding the Chinese economy, the ratings agency was encouraged by a projected budget surplus of 9.5% of GDP for 2018, down only 0.5% from the year before.

For 2019, a budget surplus of 9.4% was forecast, on the assumption of a “more optimistic outlook” for gaming revenues to grow by “about 5%” next year.

According to Fitch, the Macau government’s target 2019 central budget surplus of MOP18 billion ($2.23 billion), or 4% of GDP, was “quite conservative,” and this suggested a continued stable fiscal situation.

Fitch estimated the SAR’s fiscal reserves to be equivalent to 136% of GDP, or roughly six times the planned expenses for 2019.

Real GDP growth of 4.6% in 2018 and 3% in 2019 was forecast, “driven by our expectation for a moderation in gaming activity, combined with a subdued outlook for domestic demand,” Fitch said.

Gaming Inspection and Coordination Bureau (DICJ) data show gross gaming revenue (GGR) for 2018 as of end-November amounting to MOP276.38 billion ($34.25 billion), or 13.7% higher year on year, which Fitch said was above expectations. Future demand is expected to be boosted by several factors, including a streamlining of applications for travel from Mainland China, and projects such as the Hong Kong-Zhuhai-Macau Bridge, which opened last October.

“Mass-market gaming has grown rapidly this year, in line with the authorities’ desire to rebalance away from the more volatile VIP segment, but dependence on VIP gamers still remains high at about 55% of territory-wide gaming revenue,” Fitch said.

The ratings firm sees potential risk with the licenses for Macau’s six casino concessionaires expiring between 2020 to 2022, but it believes that authorities will avoid actions that disrupt normal business operations. At present, operators have not let up on their investments in the Cotai strip, which Fitch says is an indicator that the imminent expiration of licenses will not interfere with companies’ plans.

Fitch: 2018 will be a good year for gaming operators
Leonard Postrado
28 November 2017