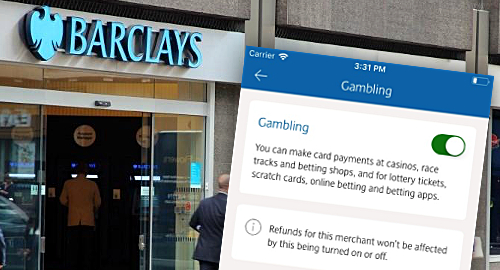 Barclays has become the first major UK bank to allow its mobile banking customers to ‘switch off’ spending on specific activities, including gambling.

On Monday, Barclays introduced a new feature into its mobile banking app that allows customers to authorize spending with five different types of merchants, and the app will automatically decline all transactions with merchant categories that are “turned off” by customers.

The categories include gambling, which spans the gamut of casinos, race tracks, betting shops, online gambling, and even lottery draw tickets and scratch cards. Other categories include groceries and supermarkets; restaurants, food outlets, pubs and bars; gas stations; and premium rate websites and phone lines.

The program currently works only with Barclays debit cards but the bank is reportedly planning to integrate credit cards into the program at a later date. Barclays customers who don’t use mobile banking can block merchant categories via telephone banking or by visiting their local Barclays branch.

Barclays worked with the Money Advice Trust and incorporated research from the Money and Mental Health Policy Institute to develop the new feature and to identify the types of customers who needed the most help controlling their spending.

Jeremy Wright, the UK minister who oversees the gambling industry, said gambling was “an area where both industry and government have important roles to play” and similarly urged “others in the banking sector to follow suit.”

Barclays isn’t the first UK financial institution to adopt such a scheme. In May, mobile-only bankers Monzo announced its opt-in strategy for allowing customers to prevent the use of their Monzo accounts for gambling purposes.