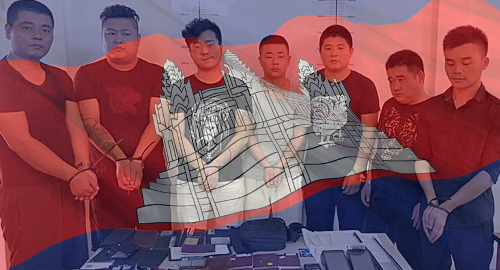 Cambodian authorities have arrested a number of Chinese nationals who allegedly kidnapped and tortured two of their countrymen who couldn’t pay their gambling debts.

On Wednesday, the Khmer Times reported that military police in Cambodia’s southwest coastal city of Sihanoukville had arrested nine Chinese nationals who reportedly detained and tortured two other Chinese nationals who’d lost their shirts gambling at one of the city’s Chinese-owned casinos.

Major Sok Kosal said the accused were members of “a Chinese gang who provided loans to gamblers” at an unspecified Sihanoukville casino. The accused allegedly held the two Chinese gamblers for five days prior to the police raiding a rented home in the area and setting them free.

The major claimed that the alleged loansharks/kidnappers “tortured” their captives “in order to get the money back from the victims’ families.” The report didn’t specify how the victims were abused, but police did seize “two electric batons” in the course of their raids.

The major also didn’t specify how the family members were informed of their loved ones’ discomfort, but a different Chinese casino kidnapping gang in the Philippines reportedly livestreamed video of their captives in order to convince families in China to make with the money. Police in that case reported seizing a taser from their suspects.

Cambodian authorities are still investigating the situation, but said the nine accused would likely face charges of unlawful confinement, cruelty and unauthorized use of a weapon. The charges carry a maximum sentence of five years behind bars.

Sihanoukville has witnessed a major influx of Chinese nationals in the past few years, and with them has come a flood of new casino investment, both of the fly-by-night variety and those with more grandiose and permanent ambitions. (Call it China’s belt, road and baccarat table initiative.)

This influx hasn’t been so warmly received by local residents, who aren’t legally allowed to visit casinos, but also find themselves priced out of rental accommodation and unable to speak the language of the new Chinese shops and restaurants. In March, the chief of Cambodia’s armed forces vowed that Sihanoukville would not become Cambodia’s Macau.