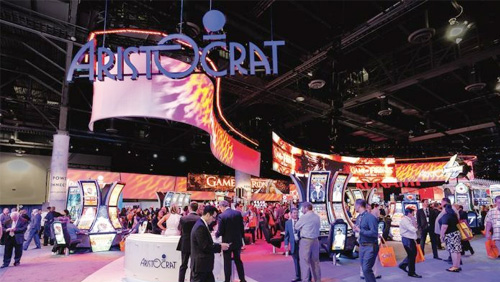 Aristocrat Leisure Limited reported a 34% increase year on year in net profit after tax and before amortization of acquired intangibles (NPATA) for the year ended September 30, on the back of record results in the North American and the Australia-New Zealand markets.

“This result reflected the strong performance delivered across the Group’s global portfolio, including profit growth of 16% in the Americas land-based business (to US$650m), a 9% lift in profit in the market-leading ANZ business (to $207m) [US$151.1 million] and transformational profit growth of over 170% (to US$331m) in the Digital business, with sustained organic growth supported by acquisitions,” the company’s press statement read.

Operating revenue for the period was AUD3.62 billion ($2.65 billion), a 47.7% increase from the corresponding period last year, and a new record for the company. EBITDA (earnings before interest, taxes, depreciation, and amortization) was AUD1.33 billion ($969.8 million), 32.7% higher year on year.

Net gearing, or net debt over consolidated EBITDA, was 1.7, higher than the 0.6 posted in the prior corresponding period, “reflecting the debt funding of the acquisitions of Plarium (19 October 2017) and Big Fish (10 January 2018), together with sustained earnings growth and strong free cash flows,” the financial report read.

Aristocrat noted that the acquisitions made for significant changes in its digital business. In the 12 months, total daily active users increased nearly fivefold to 8.1 million. “Aristocrat invested strongly in talent and technology in order to drive core growth, attack land-based adjacencies, execute on our multi-app strategy and integrate new Digital businesses,” the report read.

According to the company, US$2.2 billion of debt had been successfully repriced last May, extending maturity of all debt to seven years. It also benefited by AUD37.1 million ($27.08 million) due to a decrease in the Group’s effective tax rate from 32% to 29%, “reflecting recent US tax reform combined with the change in geographic business mix following the acquisitions.”

Aristocrat said it was anticipating growth in the coming year. This included further gains in North America; expansion of land-based gaming operations; further growth in a diversified digital segment; and digital releases scheduled for the second half of the 2019 fiscal year.

“Leveraging our strong balance sheet, operating cash flow generation and design and development capability, Aristocrat will continue to focus on unlocking growth in our core and in attractive adjacencies, for the benefit of our customers and shareholders,” Croker said.