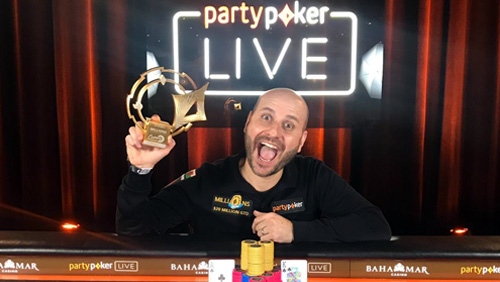 The final write up from the partypoker Caribbean Poker Party as Roberto Romanello rolls back the years to take down the $10,300 High Roller after beating Mustapha Kanit in heads-up action.

My daughter regularly tells people that I don’t have a brain. Some may think she’s right. She also says to people that my wife doesn’t have a heart. I don’t think anyone believes that’s right. It’s one of the first world problems when a two-year-old falls in love with The Wizard of Oz and insists on living out life in character.

She is Dorothy Gale.

I am the Scarecrow.

Liza is the Tin Man.

I was flying down the M4 this evening, listening to the girl with the ruby slippers telling the Scarecrow how he could be another Lincoln if he only had a brain when the Tin Man broke ranks and said to me that Roberto Romanello had won the $10k at the partypoker Caribbean Poker Party (CPP).

At that moment, I was glad to be the Scarecrow and not the Tin Man because I liked the feeling I had in my heart to hear that the Welsh Wizard had taken one down, and not any old one, but one containing the very best vultures in the game.

The game has changed.

Pros tell me that the best player in the world is Libratus, and spending time with PioSOLVER is better than getting teeth marks on your butt; so it’s nice to know there is still room for the old-school live pro. A man who relies on his gut, intuition and feel, rather than an algorithmic mind that computes numbers quicker than Yakuza slice off pinkies.

And what a time to win.

$400,000 will ensure little Frank and Maria will have enough nappies to see them through to their debut at the Grosvenor in Swansea.

So how did he do it?

Roberto Romanello Takes Down the $10k

The $10,300 No-Limit High Roller attracted 196-entrants, making mincemeat of the $1m guarantee, with $1.9m set aside, ready to be handed out to 23 of the most excellent Cadillacs of poker.

Adrian Mateos finished atop of the Day 1 pile. Romanello bagged and tagged 1.3m chips worth 65 big blinds. At the end of Day 2, Mateos had handed the baton to his Winamax compadre, Mustapha Kanit, who bagged up the most chips of the 28-remaining players. Romanello was nestled nicely in sixth place.

The Welsh Wizard didn’t stay there.

By the time there was only one table left, Romanello was sitting at the top of the chip counts.

The first to bust was the former Global Poker Index (GPI) #1 Adrian Mateos after Daniel Dvoress made a good call when put to the test to beat the Spaniard with a better two pair hand.

Then three players fell into the rail as quickly as royalties fall into the bank account of Noddy Holder at this time of the year. Mustapha Kanit exterminated Joao Simao. Romanello’s AQ took care of Guillaume Diaz’s KK, and Dvoress sent Tamasian packing when pocket fours beat KQ.

Dvoress led with four remaining, and he extended that lead going into the threeway action when he eliminated Justin Bonomo – baby flush beating the top pair of the man who has now won $25.4m playing poker in 2018.

Kanit then doubled through both remaining players when his AJ beat Romanello’s KQ, and his A4 beat the KQ of Dvoress, and then came one of the pivotal hands of the final table.

The action folded to Romanello in the small blind, and he made the call. Daniel Dvoress was sitting in the big blind, and he called. The Qd 8c and 2c decided to gossip on the flop. Romanello led for 2.5m, Dvoress raised to 7.6m, Romanello moved all-in for 58.5m, and Dvoress made the call. Romanello showed K6cc for the flush draw, and Dvoress held Qc8h for the top two pairs. The 9s hit the turn, giving Romanello one more chance to catch a club or face elimination, and there it was. The 5c and Romanello vaulted into the chip lead with more than double the chips of Kanit, while Dvoress sank to the bottom of the barrel.

Shortly after, and Dvoress went for it holding KJo, and Kanit called and won with 66.

We had a heads-up encounter with two of the chirpiest chip collectors in the game.

The pair agreed on an ICM deal.

Romanello put his foot on the pedal.

I don’t think he lost a pot.

The final hand saw the wizard moving all-in from the button holding AK, and Kanit called with the inferior K2.

It was the first live win for the Welshman since winning the World Poker Tour (WPT) Venice €2,500 High Roller back in 2014, and the trophy will soon be sitting on Frank and Maria’s mantlepiece in Gorseinon next to his WPT and EPT titles.