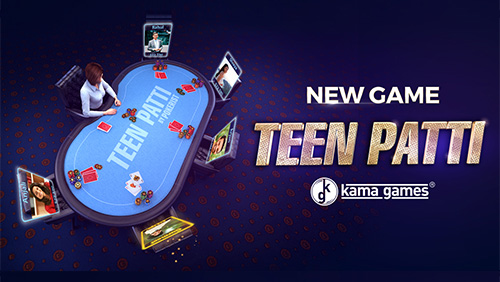 Available globally across both iOS and Android platforms, Teen Patti is a social card game that originated in India and is hugely popular throughout the region.

The game is played with up to 4 players, with each being dealt three cards face down. As the game progresses, the “pot” grows in value and the winner is ultimately determined by the player who remains in the game until the completion of the hand or has the best cards.

The launch of KamaGames’ new Teen Patti game comes at a time when the Indian market is experiencing booming growth and being currently listed as the fastest growing major economy in the world. This growth drives an opportunity for the development of more regional based games to stimulate local player growth and to further diversify the KamaGames gaming portfolio. At launch, Teen Patti will no-doubt draw the attention of the existing Indian player base as it is already a very established and popular game in the region.

Andrey Kuznetsov, KamaGames’ CEO said “As a forward-thinking casual games developer, KamaGames have always strived to offer something new and exciting to our global and regional audiences, and the launch of Teen Patti is a perfect example of this. This latest addition to our gaming lineup reflects our ongoing plans to expand our portfolio to include not only social casino games but also certain social card games which are popular in specific regions. It’s an opportunity for us to show how KamaGames is committed to embracing unique and diverse gaming variants from the emerging markets and popularizing them on our own world stage.”

For more information about KamaGames and its portfolio of products visit www.KamaGames.com.

As a leading operator in the social casino industry, KamaGames are constantly monitoring new trends and technologies and as a result, have recently launched the KamaGames Token. Based on blockchain technology and the Ethereum platform, KamaGames Tokens are design to give players the best possible return on their in game currency purchases as well as guaranteed bonus chips every day.