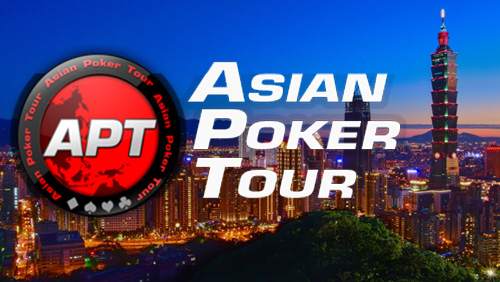 The Asian Poker Tour (APT) is going to add another stop to its circuit next year. It was announced in October that the tournament series would travel to Japan, but it now has another country in the lineup. According to an announcement by the APT, it also plans on hosting a tournament in Taiwan.

2019 will be the first year that the APT has been held in Japan and Taiwan. The Japan stop will take place in February, followed by the trip to Taiwan from February 20 to March 3.

The APT Taiwan will be held at the Chinese Texas Hold’Em Poker Association (CTP) room in Taipei. The CTP room can accommodate 25 tournament tables and has the capability to offer RFID live-streaming tables, one of the few venues in Asia able to do so. The CTP controls six poker rooms throughout the city and is Taipei’s largest poker venue.

Lloyd Fontillas, Executive Director and General Manager of the APT, said, “As the market leader in bringing world-class poker tournament events to new destinations in and around Asia, the Asian Poker Tour in partnership with the Chinese Texas [Hold’Em] Poker Association, are proud to bring the first APT event to Taipei.”

His sentiment was echoed by David Tai, president of the CTP. Tai stated, “We are happy and excited to be hosting the very first APT event here in Taiwan. Players for sure will have a great time being in the vibrant city of Taipei which has so much to offer: great food, site seeing, shopping, night life, we have it all.”

The website for the series is already live. All updates will be added to the site as they become available.

The APT is looking to make history, offering poker tournaments where they have rarely been seen before. The inclusion of Japan and Taiwan will go a long way to expanding poker awareness on a global level, hopefully leading to more acceptance and understanding that it is a game of skill, not a game of chance.