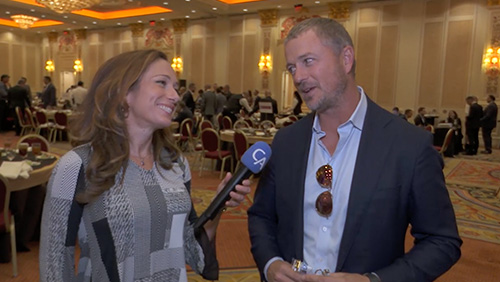 In this interview with CalvinAyre.com’s Becky Liggero, SG Digital CEO Matt Davey talks about the changes in the U.S. markets, and how his company is in a position to take advantage of these.

Matt Davey, CEO of SG Digital, a division of Scientific Games Corporation, looks to capture the yet to be tapped sports wagering market in the U.S. He’s encouraged by successes in states where the legality of sports betting has been clearly established.

“Things are great,” he said of business in New Jersey. “It’s early days, in terms of launching new products, but we have experienced operators off the back of our experienced technology. It’s been in the marketplace for three or four years now, so it’s actually amazing to watch just how fast the adoption has been in sports betting. You can tell there’s this untapped, latent demand here in the U.S.”

He sees other states becoming huge markets after New Jersey. “We’re now live in New Jersey, we’re live in Mississippi. My guess is Pennsylvania, which is probably 50% larger than the New Jersey market. The tax rates are different, some of the requirements are different, but it too is going to be a truly incredible market. I mean, it’s half the size of Australia, for instance,” Davey said.

Even somewhere like Nevada, where sports betting was only legal prior to the U.S. Supreme Court’s repeal of the federal ban, there is potential, according to Davey.

The SG Digital executive explained, “Nevada’s always been considered a small market in the sports betting perspective. Now with the entire United States potentially opening up, we’re seeing this as one of the critical testing grounds now for the new technologies as they come through, so it’s a fascinating time to be in the industry. I think you’ll see more and more investment, from both products as well as operators, and I think you’ll look at the Nevada market and think, it’s amazing it’s stayed this size for this long as we now open up the rest of the world.”

Davey said that the biggest topic during his visit to the U.S. has been sports betting, yet the Supreme Court decision won’t remain of such limited benefit. “It feels like every single conversation I have here in the U.S. is about sports betting.”

His company recently won as best digital supplier at the Global Gaming Awards in Las Vegas. Of the award, Davey said, “It comes at a very interesting time, particularly in the U.S., where we’ve seen an enormous amount of attention thrown at the industry. And we’re finding both legacy suppliers and those of the large manufacturers now competing with a number of new entrants, so it’s really a fascinating time in the industry. For us to have the judging committee pick us as number one, it makes us enormously proud.”