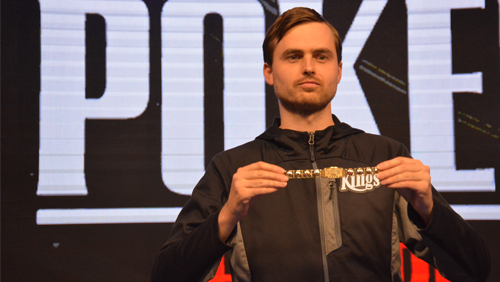 The King’s Casino is home for Martin Kabrhel, and boy does he like playing cards.

With most high rollers making their way to this remote part of the world only to participate in the big buy-in events, Kabrhel has been sticking his bony bum on seats since the World Series of Poker (WSOP) turned up here for the Circuit events that began in September.

And he won two of them.

Those two gold rings go with the two he won at the same venue, in the same event, last year, a year when he also earned a WSOP bracelet after beating 325-entrants in the €1,100 No-Limit Hold’em Super Turbo Bounty event for €53,557 within the same bricks and mortar.

And now he has two of those, as well.

The organisers were confident enough to slap a €5m Guarantee on the side of Event #9: €100,000 No-Limit Hold’em King’s Super High Roller’s tin, and next year they may increase it after 95-entrants pulled more than €9m into the coffers.

There were some outstanding performances.

But it was Kabrhel and David Peters who duked it out for the title and €2,624,340 first prize, and with Peters enjoying a 3.5-1 chip lead, it looked for all the world as if Peters would win the sixth title of another incredible run for the American.

And then Kabrhel fought back, first when his flush got paid against Peters’ top pair, leading them towards the final flip that saw the Czech star’s pocket sixes outrun the AK of Peters in a five-card sprint.

Despite Peters finishing on the losing side of the heads-up encounter, he banked €1,621,960, his best score of a year that has seen him amass more than $7.7m in live tournament earnings, including an incredible four seven-figure scores.

The win is Kabrehl’s 14th of his career, and the most significant of the lot. His previous best score was the $427,397 he earned for finishing eighth in this event last year.

WSOPC News: Martin Kabrhel does it again, and Cat Valdes gets the boot
Lee Davy
2 April 2019