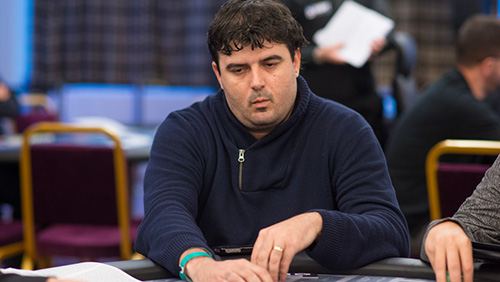 Another round-up from the World Series of Poker as Timur Margolin wins his second bracelet in the MONSTER STACK, the third bracelet for Israel in the first five events.

I once knew a man from Israel called Ori.

He wasn’t the sharpest tack in the box.

This one time during our home game, he emerged from the toilet and plonked a can of air freshener on the poker table.

It was called Mountain Fresh.

He took the top off.

“This is the reason I have to go to the Alps,” said Ori before spraying the aerosol over the table.

It took me a while to realise that Ori believed the creators of Mountain Fresh had filled the can with air from the tops of mountains.

As I said, he wasn’t the sharpest tack in the box.

But these guys from Israel at the World Series of Poker Europe (WSOPE), they are as sharp as they come.

After Timur Margolin became the third player from Israel to win a WSOPE bracelet in the first five events, word on the street is the organisers are seriously considering renaming it The World Series of Israel (WSOI).

Margolin took down Event #5: €,100 MONSTER STACK No-Limit Hold’em after beating 666-entrants in the €500,000 Guaranteed event. It was Margolin’s second WSOP bracelet of the year after conquering a field of 1,248 entrants, including a final table that housed Ismael Bojang, Chris Ferguson, Dylan Linde, Ryan Laplante and Jeff Hakim, to take down the $507,724 first prize in a $2,500 No-Limit Hold’em event in Las Vegas. He is the second player to win contests at the WSOP & WSOPE after Hanh Tran, last week.

We should also shower special praise on Mykhailo Gutyi who continued his incredible run of form at the King’s Casino. The Ukranian turned up early to compete in the World Series of Poker Circuit (WSOPC) event and finished runner-up to Wlodzimierz Laczkowski in the WSOPC Bounty Hunter event, banking €11,373. A hop and skip later, he finished 17/675 in the WSOPC Main Event for €9,234. Then he hit the WSOPE ground running with a min-cash in the COLOSSUS; he finished runner-up to Yang Zhang in a 79-person €1k No-Limit Hold’em 6-Max for €18,184, and then he won the €1,100 No-Limit Hold’em Turbo Bounty Hunter, to earn his first bracelet. Gutyi finished sixth in this one.

Back to the man of the moment, and Margolin dominated the final table, eliminating the last four opponents to take a 33.9m v 2.7m chip lead into his heads-up showdown with Raul Villaroel. The Chilean managed to double up when AK clobbered KT, but he lost his second and decisive flip when pocket sevens failed to outrun J9 after a second nine landed on the turn.

Other bulls that smashed a few china cups deep in this one include Casey Kastle (44th), Kalidou Sow (57th) and Rex Clinkscales (58th).

The last time I saw him, he was hauling in a pot in the middle of a rabid defence that fish fingers contain nothing but mashed potato.

I think he might be right on that score.