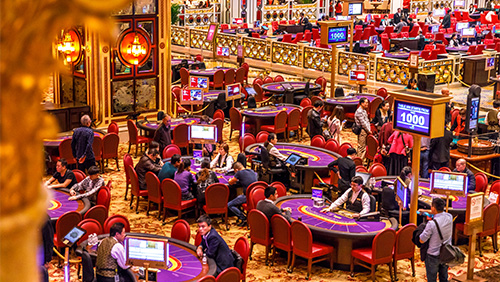 Macau law enforcement officials have been working hard to clean up the city’s image this year. Gaming-related crime is already down compared to 2017 and the city continues its efforts to ensure this trend doesn’t stop. In its latest example, police have been out in force, cracking down on illicit money exchanges.

According to Macau’s Judiciary Police, which oversees crime activity related to casinos, police were busy at a number of downtown casinos this past weekend. The casinos were not identified by name, but the force’s acting head of gaming-related crimes, Chan Chong In, indicated that 12 people were taken to the police station in order to have their identities verified. Of those, two were ultimately detained over possible involvement with illicit money exchange services.

Following their downtown visit, police officers then decided to spend some time in Cotai and conducted the same type of police action there on Tuesday. Cotai has seen a number of crackdowns over the past several months—from May to July—to curb illegal money exchanges in the area.

Chan points out that the limited number of detainments shows that there does not exist an “acute” criminal trend in the city. Speaking from the City of Dreams Macau on Tuesday, he said, “Following a series of combatting operations since the beginning of this year, we haven’t really seen that these activities have got more acute,” adding, “The people that were engaged in these activities have not committed more serious criminal acts.”

Tuesday’s visit to Cotai by the Judiciary Police was conducted in tandem with Macau’s Unitary Police Service. The two departments led an anti-crime operation and ultimately detained 20 people. The majority of these were apparently from mainland China and 17 of them were detained for allegedly being involved in illicit money exchanges.