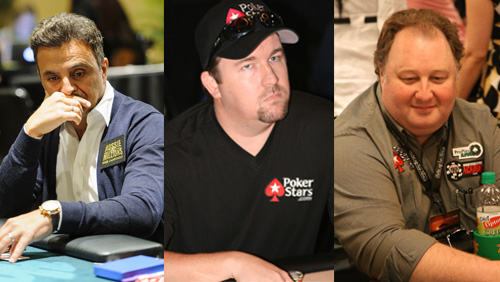 Three stories involving former World Champions of poker including a heads-up match from Down Under, a man with funny sunglasses turning all author, and the man who made poker ‘brilliant’ winning an online brace.

Poker is not a team sport.

It’s donkeys waiting for a ride on the beach.

It’s the blue flame of a welders’ torch.

So we should have more jousts like the one the Australian Poker Tour has arranged as the meat in their Grand Final soup.

It’s a nice touch by the Australian Poker Tour organisers. It gives Queensland poker fans something to get excited about in an 18-month period that has been Humpty Dumpty for the Australian poker community, losing the ability to compete in black as they come online poker markets because of one or two numpties in government.

In addition to those WSOP laurels, both players have World Poker Tour (WPT) titles on a mantelpiece somewhere. Hachem won the Bellagio Five Diamond Classic in 2006 for $2.2m, and Mizrachi won the 2005 LA Poker Classic for $1.8m, and the 2006 WPT Championship for $1.1m.

If you aren’t in Queensland, and you want to see these two titans drawing a finger across their throats, then Hachem says he is “pretty sure” a live stream will be available.

And what does the winner get?

My mother always told me it’s not the amount of money that matters, it’s the taking part that counts.

Greg ‘Fossilman’ Raymer Gets The Quill Out

A year before Joe Hachem was on top of the world, Greg ‘Fossilman’ Raymer hung out there.

Raymer was the first person to take advantage of the post-Moneymaker WSOP Main Event boom when he topped a field of 2,576 entrants (a 207% increase, if I haven’t screwed the calculation up like I usually do), earning $5m bucks (doubling Moneymaker’s $2.5m) after beating David Williams, heads-up.

That victory made Raymer one of the most prominent poker players in the world and had he released a poker book during the post-victory hype he may have earned enough money to buy a more expensive pair of sunglasses.

It seems Raymer is more ‘steamboat’ than ‘speedboat’.

D&B is also the home for Chris Moorman’s two efforts, Mike Sexton’s recent biography, and the 1,876 poker books written by Jonathan Little who is not ‘Little’ by name ‘Little’ by nature when it comes to the art of book writing.

Will the book be a success?

Talking to PokerNews about the upcoming treatise on tournament poker, Raymer had this to say:

“There is also a lot of advice that is more advanced, and not known or at least not well understood, even by some of the very successful and high-level tournament players out there right now.”

Methinks some of the folks hanging around the Triton scene or PokerGO Studios may disagree with that statement, but there is no doubt, Raymer is a local hero in the land of the Stars and Stripes, and that’s D&B Publishing’s best shot at shifting a few copies.

I need something to hide the knife under the bed.

Any writer worth one’s salt would have put this motley crew in chronological order.

I’m not worth a grain.

As a teenager stepping into a whorehouse for the first time, I’m not thinking straight.

Chris Moneymaker is arguably the most famous former WSOP Champion of the lot, after turning the mouselike online poker industry into an elephant with his iconic 2003 victory over a cool-as-fuck Sammy Farha.

The Tennessee man earned his way into that epochal Main Event via an online satellite, and last week he showed that he’s still got it by securing two titles at the New Jersey Championship of Online Poker (NJCOOP).

The PokerStars Team Pro dipped his fingers into the virtual realm as part of the Moneymaker PokerStars Player’s Championship (PSPC) Tour, where winners are walking away with $30,000 Platinum Passes to the $25k buy-in event in the Bahamas, January 2019.