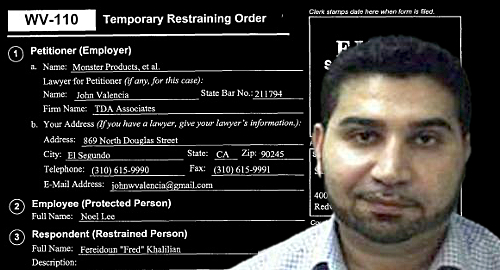 Online gambling scammer Fred Khalilian has been booted from Monster Technology Group less than a year after selling the company his worthless gambling technology.

On Tuesday, electronics firm Monster Products issued a press release celebrating its 40th anniversary, while casually mentioning that its chief operating officer, one Fereidoun ‘Fred’ Khalilian, had been “successfully exited out of the company as of July 27, 2018.”

The release went on to say that Khalilian was the subject of a temporary restraining order issued in California’s Superior Court “for the protection of numerous employees of Monster against threats of mutilation, death, and threats to family.”

Furthermore, Monster has filed reports with the South San Francisco Police Department and other law enforcement agencies, “including the FBI,” concerning “allegations of fraud, theft and conspiracy.” Accompanying Khalilian on his way down Monster’s shame chute was “the team he brought into the company to do a hostile takeover.”

The press release goes on to cite a raft of unfavorable online articles concerning Khalilian’s past exploits, including one report from CalvinAyre.com. (Our drumbeat of negative coverage even earned this writer some temporary fame as a purveyor of gay pornography. But I digress…)

Last October, Monster raised eyebrows by announcing that a subsidiary had struck a deal to acquire the online gaming software assets (such as they were) of Khalilian’s Universal Entertainment Group (UEG), with the plan to use said assets to launch PokerTribe.com on behalf of the Iowa Tribe of Oklahoma.

PokerTribe was the second incarnation of Khalilian’s efforts to pull a fast one on unsuspecting tribal groups. Khalilian collected $9.5m from his original Oklahoma tribal partner before new tribal leadership pulled the plug on the site (PokerTribes.com – plural) which never actually opened for business. This led to lawsuits and a probe by the National Indian Gaming Commission.

This spring, the Iowa Tribe of Oklahoma launched GreySnowPoker.com, apparently deciding that the PokerTribe brand had been irrevocably tainted. PokerTribe.com (singular) currently redirects to InSkyCasino.com, another of Khalilian’s improbable can’t-miss schemes, in which gamblers strapped into airline seats would be allowed to play online casino games, you know, as opposed to doing so via their mobile devices with any one of thousands of existing online gambling operations that managed to launch without Fred’s help.

Despite the fact that he walks around with red flags positively shooting out his ears, Khalilian has proven remarkably resilient in rebounding from his very public setbacks. But with any luck, this will mark the end of Khalilian’s dalliances on the fringes of the online gambling industry.