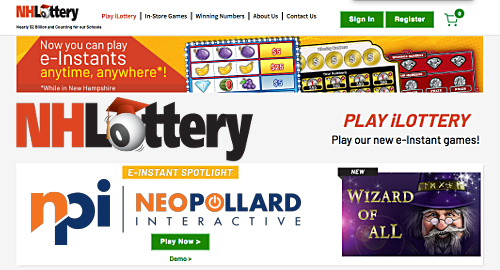 New Hampshire is the sixth US state to take its lottery online, offering both draw tickets and instant-win games to state residents.

The New Hampshire Lottery quietly launched its iLottery products this week, with technology provided by NeoPollard Interactive LLC (NPi), the co-venture of Pollard Banknote and NeoGames that helped bring the Michigan Lottery’s digital presence to life a few years back and also powers the online subscription platform of Virginia’s state lottery.

The New Hampshire iLottery is utilizing NPi’s turnkey iLottery 360° Solution to offer online sales of Powerball and MegaMillions draw tickets as well as eight instant-win games, all of which is available via both desktop and mobile devices to customers who manage to stay within the state’s geographic boundaries.

New Hampshire Lottery exec director Charlie McIntyre called the online launch “the critical next wave component in enhancing our players’ direct interaction with our games.” McIntyre said the Lottery had selected NPi because its domestic and international experience “would best ensure a successful rollout and early adoption of the online lottery experience.”

NPi’s GM Liz Silver predicted the online launch would “strengthen the Lottery’s portfolio and increase sales across all channels” through cross-promotion of traditional lottery products with interactive games. The online channel will also provide “new insights into player preferences and behaviors,” including trends that might indicate the early warning signs of problem gambling behavior.

PENNSYLVANIA CASINOS PLAY THE ‘THINK OF THE CHILDREN’ CARD
New Hampshire’s online launch follows this summer’s launch of the Pennsylvania Lottery’s online offering, which has proven a hit with customers but has resulted in the state’s land-based casino operators filing a lawsuit to curtail the iLottery’s instant-win games, which they view as an unwarranted incursion into their exclusive domain over slot machines.

This week saw David La Torre, spokesperson for the Pennsylvania Casino Gaming Coalition, pen an op-ed that noted with some irony that the seven Coalition members “are required by law to provide space for lottery ticket vending machines in their casinos,” while arguing that “it should offend anyone” that the lottery’s online games “clearly flout state law.”

La Torre goes a little off the rails by claiming that the iLottery is “making it easy for children to play casino-like games without any proper age verification or identification.” La Torre is referring to the iLottery’s ‘demo play’ mode, which doesn’t involve forking over any money and thus doesn’t require customers to concretely demonstrate that they’re of legal age.

A major chunk of the Coalition’s beef with the iLottery is its availability to individuals aged 18+, while the casinos can’t admit anyone under 21. But dressing this up as concern that free-play iLottery games will “nurture gambling habits for children” seems to be over-egging the mixture somewhat.