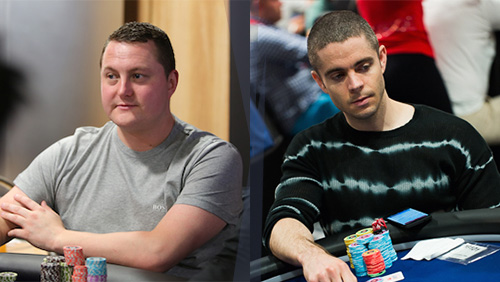 Three barrels with a distinctive partypoker flavour including a victory for Colin Gillon in the 2018 partypoker LIVE Irish Poker Masters, a nice pick up for Ben “CowEyed” Tollerene in POWERFEST, and Sam Trickett makes an appearance in the UK rags.

Smarter people than me listen to a single tune on repeat when they write believing they are more likely to get into the zone. I tried it yesterday. It didn’t work. I spoke to a friend of mine who is far superior to me, and he told me to change the track, so today, no more Deeply Dippy by Right Said Fred, and instead I’m listening to Bad Radio by Leftfield.

As you can tell from that first paragraph, I need a new line.

This one’s not working.

One man who got into the zone as millions of people around the UK lost themselves in one type of drug or another this weekend was Colin Gillon, and I doubt he will ever find his way back there again.

Gillon, who had only ever cashed once before competing in the 2018 partypoker LIVE Irish Poker Masters, stained his teeth with the blood of 857 entrants on his way to a €175,000 victory in the €1,150 buy-in Main Event.

The only downside to this tale was a €121,575 overlay for the organisers, a record I thought they had pulled from beneath the needle a long time ago.

Next up for partypoker LIVE is the £8.5m Guarantee MILLIONS UK held in Dusk Till Dawn (DTD), Nottingham Sep 29 – Oct 7.

In a smart piece of promotion, partypoker introduced their top line ambassador, Sam Trickett, to the UK’s local rags this weekend. Mothers and fathers from Lands End to John O’Groats are now booking coach holidays to Nottingham after learning that it’s possible to turn a scaffolding career into a £30m poker one.

The Daily Star interviewed the UK’s most winningest live tournament player, and these little beauties emerged from the pages.

– There were times back in the day when he could make up to £7.6m in a single day.
– He has lost a million in a single sitting a ‘few times.’
– Losses bigger than a million would make him feel ‘uneasy’.
– He is worth an estimated £30m.
– It’s hard to find friends when you’re worth an estimated £30m.
– He always knew he would end up with the money over the long run.
– He doesn’t get nervous when playing for millions.
– He is a sucker for material things.

One man I am sure has never had a job as a scaffolder is Ben“CowEyed” Tollerene, and this weekend, the high rolling genius became $310,440 the richer after taking down the $5,200 buy-in $1m GTD Championship Event.

It doesn’t seem to matter how many of these things they keep putting on, the boys and girls keep putting their sticks and stones away long enough to get involved.

Seven days are remaining, and another 209 events to go.