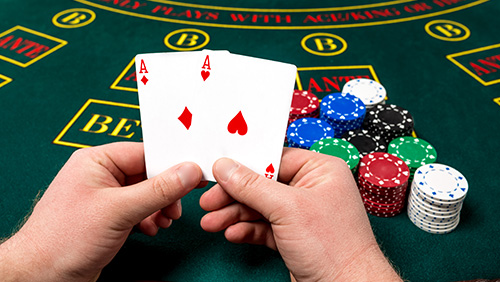 It’s not against the rules in poker to reveal one of your cards during a hand, but it certainly is a dumb idea. A poker player found this out the hard way during a “Live at the Bike” cash game at the Bicycle Casino near Los Angeles, California, last Monday.

The fun began when “Bitcoin Yoda” made a river bet of $10,000 into a pot that already held $15,000. He was facing off against Eric Hicks, who was on the button at the time, and began to taunt his opponent a little, offering to show him one card.

While Hicks was still deciding whether or not to call or fold, he picked one of “Yoda’s” cards, which happened to be the 3 of spades. With a board of A-5-2-K-4, and only one other spade, Hicks knew his opponent couldn’t have a flush, but most likely had a 5-high straight, possibly a 6-high straight. Either way, he felt he was in good shape.

The table couldn’t believe that “Yoda” would reveal a card and Hicks was only too willing to play along. He pushed the pot to $25,000 and “Yoda,” who definitely didn’t have the force with him that day, immediately called with his flopped straight. What he didn’t expect to see, however, was what Hicks was hiding as he flipped over his cards. Three diamonds popped out between the flop and the turn, and Hicks was sitting on the 7-6 of diamonds. He picked up the win with a flush.

The game started as a $5/$5 with a $5 ante. Working a pot that held over $60,000 against those amounts is simply insane, but not uncommon where the game, as did this one, allows the Mississippi Straddle.

They say that if there’s no video, it didn’t happen. Fortunately, the hand was partially caught on video and shared on the Live at the Bike Twitter feed.

Lesson learned for Yoda. Undoubtedly, he will think twice in the future about making a reveal during a game. The beauty of Texas Hold’em is that there are so many different possible combinations and no one wins until all the cards are shown.