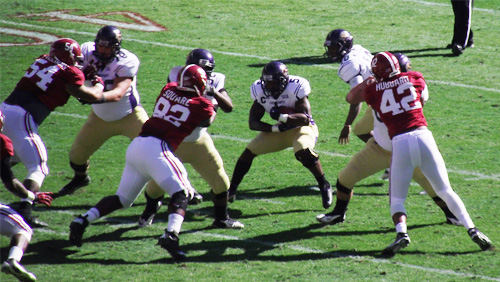 It’s important to know that college football non-conference schedules are generally set years in advance. Thus, a school could schedule an opponent this year for a game in 2023 expecting said foe to be a good team like it would be in 2018. Doesn’t always happen that way.

In the College Football Playoff era, teams have taken different approaches to their Week 1 foes. Alabama has been playing a marquee opponent at a neutral site, and that continues this Saturday as the top-ranked Tide are 25-point favorites in Orlando against Louisville (a former marquee opponent perhaps). That spread would look quite different if the Cardinals still had former Heisman-winning QB Lamar Jackson, but he’s now with the Baltimore Ravens. The Tide are 9-1 ATS in their past 10 Week 1 games.

The week kicks off with the defending national champion Central Florida Knights, ranked No. 21, visiting American Athletic Conference foe Connecticut on Thursday night with UCF at -23. UCF wasn’t the true national champion last year, of course, but claimed a mythical one as the nation’s only unbeaten team. The Huskies have covered their past five AAC games.

On Friday, Western Kentucky visits No. 4 Wisconsin and one of the Heisman Trophy favorites, Badgers sophomore running back Jonathan Taylor. UW is one of the biggest favorites of Week 1 (35.5) and has won its past 10 at home by an average margin of 21.1 points. WKU has won six straight Week 1 games, however, and is a stellar 31-13 ATS in its past 44 as an underdog.

No. 3 Ohio State will be without suspended head coach Urban Meyer on Saturday afternoon when the Buckeyes host one of the worst Power 5 programs in the country, Pac-12 doormat Oregon State. The Beavers are 38-point underdogs and have lost 19 straight on the road by an average of nearly 25 points per game. Meyer is suspended the first three games.

The marquee matchup of Week 1 is No. 6 Washington, the Pac-12 favorite, facing No. 9 Auburn, the defending SEC West champion, in Atlanta on Saturday. The Tigers are 1.5-point favorites, which is essentially saying it’s a pick’em because Auburn will have likely 95 percent of the fan support in a pseudo-home game (home games are worth around 3 points for the most part). Washington has won 10 in a row in September but is 0-4 ATS in its past four as an underdog.

The opening week closes with a big one in the ACC as No. 20 Virginia Tech visits No. 19 Florida State on the Labor Day holiday night in the United States. FSU is -7.5 but has failed to cover its past six conference games.