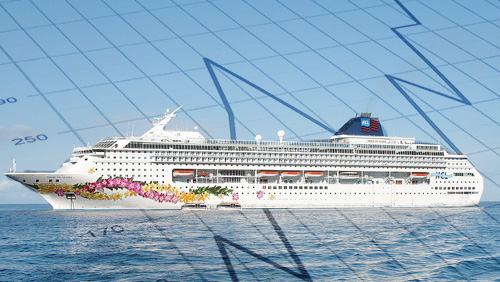 Casino cruise ship operator Genting Hong Kong Group posted a $141.3-million loss for the first half of 2018, 30% lower than last year’s loss for the same period.

In its press release, the company noted that net cruise revenue from January to June 2018 had increased by 41% to $514 million, compared to $364 million during the same period in 2017, partly “due to the inclusion of World Dream and four Crystal River Cruises vessels in 1H2018.”

Revenue for the first half was at $777.6 million, 46% more than last year’s revenue for the same period. Earnings before interest, depreciation and amortization (EBITDA) for cruise-related activities, excluding startup costs for new ships, was at $63 million, whereas the company reported a first-half loss of $18.3 million in 2017.

The company directors also declared a dividend per ordinary share of $0.01 for the first half, to be payable by September 27.

Among Genting HK’s land-based operations is Resorts World Manila, which is expanding in the months to come. “Completion of the Sheraton Manila Hotel and Hilton Manila is targeted for the second half, while Hotel Okura Manila will open in the first half of 2019, effectively making RWM a six-hotel integrated resort,” the company said.

Last June, Genting HK decided to sell its 1.4% stake in Norwegian Cruise Line Holdings. According to the terms of the sale, the company will be selling the 3.15 million shares it holds, for at least $43.86 per share, over a period of 12 months. The sale is intended to finance general working capital and capital expenditures, as well as possible new investments.

Genting HK’s parent company Genting Berhad is one of several companies hoping to procure a gaming license in Japan, after the recent approval of the country’s Integrated Resorts Implementation Bill.