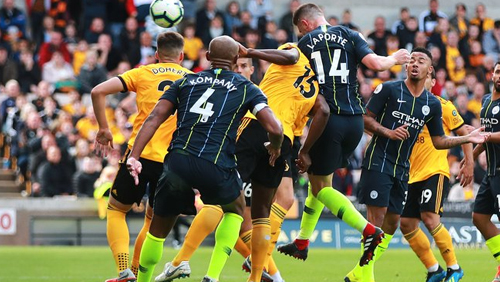 Match Day 3 of the English Premier League sees Man City drop two points at Wolves, and Liverpool capitalise with a victory over Brighton to take them to the top of the league.

After watching Manchester City’s Amazon Prime documentary All or Nothing, you can’t help but get caught up in the romanticism of the rise of the Blue half of Manchester.

Under Pep Guardiola they look like a side capable of bettering the glittering array of stats created by Sir Alex Ferguson at his pomp. And this is why it was a shock to learn that City had only come away from the Midlands with a point this weekend.

“It was a very good point,” said Guardiola.

Wolves were the dominant force in the Championship last season, and that winning mentality was at the fore during a tremendous effort against the English Premier League (EPL) Champions.

Nuno Espirito Santo’s side may have only had 29% of the possession, but they became the only team since the start of City’s title-winning season to register double digits in the Shots column.

It looked like Wolves had taken the lead after Raul Jiminez finished a tap-in, only to be ruled offside, and then Sergio Aguero struck the base of the post before Rui Patricio tipped a 25-yard Raheem Sterling screamer onto the crossbar.

Joao Moutinho, who picked up the man of the match award, fired in a smart cross, and Wily Boly dived low to send the ball past Ederson via his hand. The EPL is VARless this season, the officials missed it, and Wolves were one-up.

There’s one thing you can guarantee about City – they will score – and it came in the 69th minute. Ilkay Gundogan slung a free kick into the box, and Aymeric Laporte sent a thumping header past the Wolves keeper for his first goal for the club.

City pressed for the winner.

Gabriel Jesus had a great chance from six yards out but sent his header directly into the legs of Patricio, and then with the last kick of the game, Aguero thundered a free kick against the crossbar.

It was a point that Wolves wouldn’t have expected, and it means the Midlands club have only lost two of the 28 home games played under Santo’s tutelage, winning 18 and drawing eight.

Privately, City will be disappointed.

With City dropping two points, Liverpool moved to the top of the league with a professional performance against Brighton.

Both teams came into this one in a confident mood. Liverpool carried a 100% record with them, and the Brighton players were still buzzing after beating Man Utd 3-2 at the Amex the previous weekend.

Sadió Mané had the first chance of the game, shooting wide after being put through on goal by Mohamed Salah, Matthew Ryan saved superbly from a close range nut from Roberto Firmino, and then Trent Alexander-Arnold hit the bar with a free kick from the left-hand side of the box.

And then the breakthrough.

The Brighton defence popped the ball about lackadaisically inside their half. James Milner picked a pocket, and three swift passes later, Salah was moving the ball into the back of the net with his left foot.

The goal was world class, and it means Salah has now had a foot or a head in 45 EPL goals (34 and 11 assists) since the start of last season, and he’s still not firing on full cylinders. It was his 29th goal in 29 Anfield appearances.

Pascal Gross should have captured a point towards the end of the match, but Alisson made a smart save ensuring Liverpool would enjoy the weekend on top of the league.

“We still have a lot of work to do,” said Jürgen Klopp during the post-match interview.

Chelsea and Watford are the two other teams to have a perfect win rate after the first three games.

Watford’s Javi Gracia told the press that his side had achieved something ‘massive’ after goals from Roberto Pereyra and Jose Holebas in a 2-1 win over Crystal Palace made sure Watford won their third successive opening game of the season for the first time in the club’s history.

Chelsea overcame Newcastle at St James Park thanks to an own goal from DeAndre Yedlin with three minutes remaining. Eden Hazard gave the blues the lead from the penalty spot in the 76th minute before Joselu equalised seven minutes later.

Spurs can join the club if they beat Man Utd on Monday night.

West Ham is the only club to have lost all three games, after losing against their perennial victor’s Arsenal by three goals to one at the Emirates. Marco Arnautovic had given the Hammers the lead, but goals from Nacho Monreal, Danny Welbeck and an own goal from Issa Diop handed Unai Emery his first win at the club. Manuel Pellegrini is still waiting for his.