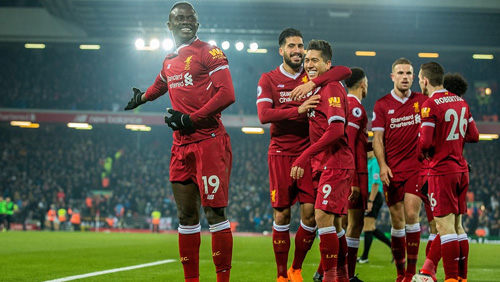 Match Day 2 of the English Premier League is in the books after Liverpool continued their rich Monday Night Football form with a victory against Crystal Palace at Selhurst Park.

Liverpool once again proved why they are Man City’s main rivals this season after a polished performance at Selhurst Park.

Both sides came into this one in decent nick. Palace enjoyed an away day win at Fulham in the opening game of the season and had not lost a Premier League game in seven, stretching back to a 2-1 defeat against Liverpoo

l on the last day of March.

During the Man City Amazon Prime special All or Nothing there is a scene where Pep Guardiola tells his players, “Guys if you want to be a top, top team you have to score fucking goals.”

Last season, Jurgen Klopp’s men found the back of the net 84 times in the Premier League, second only to Man City, and their 2-0 win over Crystal Palace means they have now scored six in their opening two games.

Does this make Liverpool a top, top team?

We’ll find out this season.

Andros Townsend cut in from the right and unleashed a left foot boomerang of a shot that cannoned off the top of the bar on the 24-minute mark.

And if Palace could have sneaked into the dressing room at half-time with neither net having rippled then who knows? But that didn’t happen. Right on the stroke of half-time, Mohamed Salah made Mamadou Sakho look like a mug with a smart turn in the box, and the former Liverpool defender brought him down. Michael Oliver pointed to the spot, and James Milner made it 1-0.

Now here’s the thing about James Milner scoring for Liverpool.

In the 48 games that the midfielder come defender has found the net for his club, they have never lost.

Not a good omen.

Roy Hodgson would complain about the penalty during the post-match discussions, claiming that the Egyptian went down easier than a bag of spuds in a swimming pool. However, had the Premier League had VAR (it’s the only significant European league NOT to adopt the new tech), Hodgson would have had no complaints.

With only one defeat in their last ten away games, Liverpool is one of the best teams on the road in the Premier League. Lightning counter-attacks are one of the primary reasons, and Sadio Mané finished one off in injury time to secure three points for the Merseysiders.

The ball broke to Salah on the edge of the Liverpool box from a Crystal Palace corner. The 44-goal man sent Mané on a 50-yard dash before rounding Wayne Hennessey to score his third goal of the season, and his sixth goal against the Eagles in his eighth game.

The victory sees Liverpool join Man City, Chelsea, Watford, Spurs and Bournemouth as the only teams with a 100% record going into Match Day 3 where they will face Brighton at Anfield.