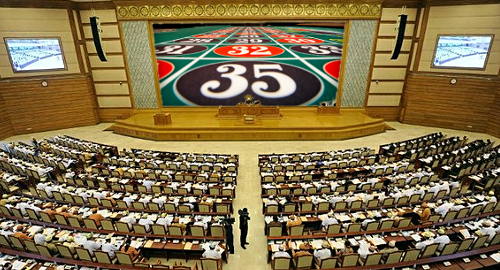 Myanmar’s government has followed through on its promise to introduce legislation permitting legal casinos catering to international tourists.

On Tuesday, Myanmar’s Public Affairs Management Committee submitted the Gambling Bill 2018 to the Hluttaw, the country’s bicameral legislature. The bill would amend the 1986 Gambling Act to permit casino development in areas of the country popular with foreign visitors.

The Myanmar Times quoted Mingaladon MP U Aung Hlaing Win saying that a legal casino industry “will enable a whole new sector to flourish and draw much needed taxes and foreign currency into the country.”

U Aung Hlaing Win added that the country’s economic needs are sufficiently urgent that there was “no time” to start from scratch with an entirely new bill, and that the amended 1986 Act would be bolstered at a later date by rules and bylaws spelling out the nuts and bolts of casino regulation.

Committee secretary U Kyan Soe Lin said the new casinos would likely be built near the borders of China and Thailand with the expectation of drawing the bulk of their clientele from those countries. Local residents, whose only legal gambling option is the state-owned Aungbarlay Lottery, will be strictly forbidden from entering these new legal gaming venues.

Myanmar’s path to casino legalization has been a long one, with multiple failed attempts to update the 1986 Act over the years. Myanmar already has a significant number of underground casinos which pay annual taxes to the government despite operating without formal approval.

This spring, about a month prior to the kickoff of the 2018 FIFA World Cup, Myanmar’s government warned private telecom firms that any involvement – direct or indirect – in facilitating online gambling by local residents would result in the immediate shutdown of their business and possible criminal prosecution.