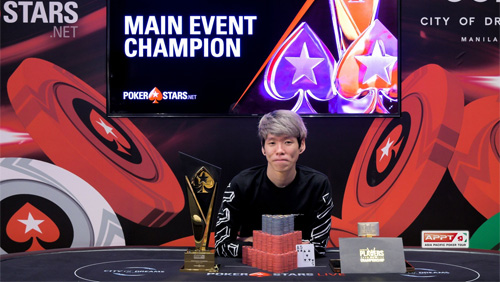 The City of Dreams Manila played host to the Asian Poker Tour Main Event over the past couple of days, and the turnout was spectacular. A total of 1,364 entries were counted for the game and just 41

made it to Day 3. But, there can be only one winner, and this year, the winner was Singapore’s Wilson Lim. He picked up $243,324 and a $30,000 PokerStars Platinum Pass for next January’s PokerStars Poker Champions tournament in the Bahamas.

All through the final day, players dropped quickly. When the last nine were ready to face off at the final table, things got serious and they all dug in. Yuan Chao Li from China began to bully the table, betting on everything, raising whenever possible and playing a game that was more like throwing darts to see what would stick than playing solid poker. It paid off, however, as Li would ultimately make it to the final heads-up battle.

Lim was the short stack for almost the entire day. He emerged from being down to one big blind after finding some lucky runs and turned his luck into a payday. He said after the game, “Before I came to the final table, there were two tables and I had less than one big blind, so I just went all-in blind. I doubled and doubled until I was a big stack.”

When asked about what it was like to win the largest APPT Main Event ever recorded, he said, “Awesome and overwhelming for me, I played very long hours for this one because the schedule is so tight and I got maybe less than six hours of sleep every night.”

“I have been playing poker for about 10 years now, it was about one or two years in that I started to realize poker was more than just gambling and I can improve myself. After a few years I started improving and now I earn most of my money just from poker,” he added.

Lim would finally face off against Li in heads-up competition. Li’s erratic style of play, which had helped him outlast the other seven players at the final table, didn’t serve him well in the final hand, which took place in level 37. Li moved all in and Lim responded. Flipping over the cards, Li revealed a Q-7 off-suit—considered to be nothing better than the “average” poker hand in heads-up action. Lim was sitting on an A-5 of clubs and he pounded in his win with a board that ran out 2-J-J-8-9 with three clubs for the A-high flush win. Li picked up $149,334 for his second-place finish.