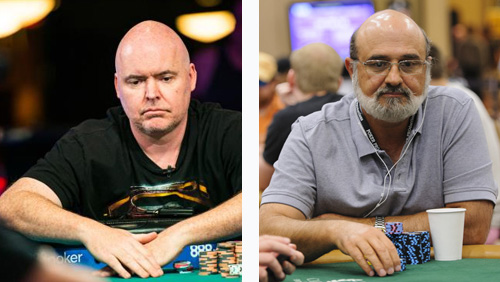 Another year rolls by, and Mike Matusow and Huck Seed have missed the cut for the Poker Hall of Fame again, with the current members and the media believing John Hennigan and Mori Eskandani are more deserving.

On Thursday, I head out to Jeju to work at the Triton Poker Series event at the Landing Casino, and earlier, today, a friend of my dearly beloved asked me if I was looking forward to the trip.

I don’t think about the future.

I don’t think about the past.

I’m too busy figuring out how I can get through the next 24-hours without becoming a pantomime villain.

I have the attention span of a gnat, and I don’t think I’m the only one.

I made an oversight a fortnight ago.

After the general public and the Poker Hall of Fame (PHOF)

Governing Council had created the latest shortlist. I took a punt that those with the power to create a legacy would be sentimental about the whole thing.

Seeing the names of Mike Matusow and Huck Seed on an annual basis is becoming a tad uncomfortable. I figured I wouldn’t be alone. I genuinely thought they would get the pity vote.

I failed to understand the power of the moment.

John Hennigan made the shortlist for the first time. A first-time induction is rare, reserved for the likes of Daniel Negreanu and Phil Ivey. So I gave Hennigan the thumbs down.

Fortunately for Hennigan, the man is on a roll, cashing in 11-events WSOP events this summer, making four final tables, and winning his fifth bracelet in the $10,000 H.O.R.S.E.

Until Ben Yu took down the $50k, Hennigan was Shaun Deeb’s primary rival for the WSOP Player of the Year (POY) award, and I believe waking up and seeing Hennigan’s name hogging the headlines each morning affected those casting the votes.

One of the success stories of the past 18-months has to be the growth of Poker Central and PokerGO. And I firmly believe the increase in excellent programming by these bods, resulted in Mori Eskandani getting the second vote.

‘Uncle Mori’ immigrated to the US in 1974, aged 18, and has worked in the poker industry for more than 30-years, the latter end of that run, in various roles for his company Poker PROductions.

Last year, the Global Poker Index (GPI) honoured the 62-year-old by handing him their Lifetime Achievement Award at the American Poker Awards, and it was a clear indication that the surge in digital media poker shows could result in one of their finest becoming enshrined in the PHOF.

What Does This Mean For The Mouth & The Seed?

All of this doesn’t bode well for the perennial short-listers Mike ‘The Mouth’ Matusow and Huck Seed.

If they don’t get the sympathy vote soon, then unless either of them does a John Hennigan at a future World Series (with The Mouth the more likely of the two), I can see this pair on the short-list for the next fifty years.