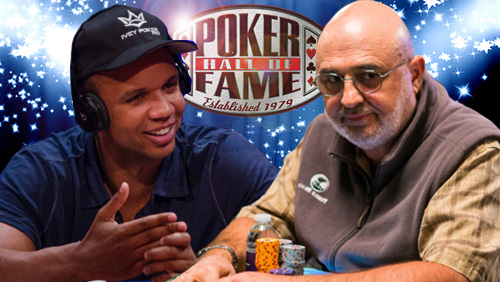 The shortlist for the 2017 Poker Hall of Fame has been revealed with Phil Ivey, and Mori Eskandani appearing for the first time.


Who has the heart of a whale, the sting of a rattlesnake, and the puff of a peacock?

It’s time to pick a poker star from the annals of time and cement his place in the Poker Hall of Fame (PHOF).

The public nomination process is done. Ten finalists have emerged, vetted by the Poker Hall of Fame Governing Council, and now subjected to the scrutiny of the 27 living members of the PHOF, and 18 members of a blue-ribbon panel of media.

Here are the ten finalists:

Max Pescatori, Matt Savage, and Dave “Devilfish” Ulliot return for the second successive year. David Chiu, Ted Forrest, Thor Hansen, Mike Matusow, and Huck Seed have all, at one time or another, been on this short list. Phil Ivey and Mori Eskandani make the cut for the first time.

Here are the criteria for selection:

• A player must have played poker against acknowledged top competition
• Be a minimum of 40 years old at time of nomination
• Played for high stakes
• Played consistently well, gaining the respect of peers

• Stood the test of time
• Or, for non-players, contributed to the overall growth and success of the game of poker, with indelible positive and lasting results.

Ever since Dan Harrington and Erik Seidel joined the club in 2010, the nomination panel has selected two people so you can bet the same will happen this year.

The induction ceremony takes place as part of the WSOP Main Event festivities, July 21, and you can catch all of the speeches, and tears, on ESPN.

If Dave ‘Devilfish’ Ulliot was going to make the PHOF, then last year was the year to make that happen. If Daniel Negreanu, and Phil Ivey had upstaged him, then I could understand, but the selection of Todd Brunson and Carlos Mortensen shows that Devilfish is not highly thought of by the people who matter, and so I don’t see him getting in this year.

With the Mortensen induction proving a point to the xenophobic quarters, I think Europeans are done for some years yet. So I don’t expect to see Max Pescatori or Thor Hansen in the running.

I am going to bracket David Chiu, Ted Forrest, and Huck Seed into one. All three make regular appearances on this list but never make the cut. Each year, as more interesting choices emerge, it seems harder to choose them. I am sending all three to the rail.

All four are extremely strong candidates, as two of them represent players, and the other two represent non-players, I am going to choose one of each.

Mike Matusow’s performances at this year’s WSOP where he has cashed in seven events, making three final tables, and reaching the final two tables in a further three events, means his name will be fresh in everyone’s memory.

And there is a big but.

Phil Ivey will breeze into the PHOF the same way Daniel Negreanu did when he reached the age of 40 back in 2014. If anyone ticks all of the boxes it is Ivey, and his recent lack of interest in promoting the game shouldn’t go against him.

Joining Phil Ivey in the PHOF will be Matt Savage. I believe Mori Eskandani is an excellent choice, but Savage has my vote. The man has done so much to promote the game and has been the earpiece for the players for so long. I also love the way that he is always available on social media, interacting, and not hiding from no one, or nothing.