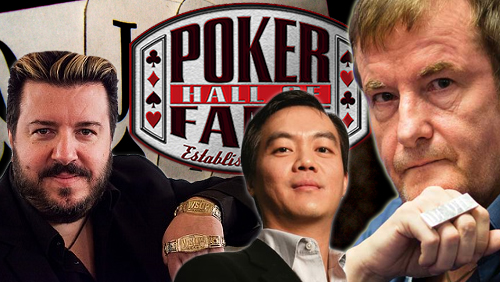 At least one player—more likely two—will be joining the ranks of this year’s Poker Hall of Fame. The names of the 10 finalists were announced on Wednesday, following a public nomination process and vetting by the hall of fame’s governing council.

A former restaurateur in Colorado, Chiu started his career in poker as a dealer before transitioning into one of the most successful tournament players in history. The 55-year-old is a five-time WSOP gold bracelet winner and has raked in almost $7.9 million in career tournament earnings since he first started playing tournaments in 1996.

Frenchman Fitoussi is regarded as the man who introduced Texas Hold’em into France in 1995. He has more than $2.7 million in career poker winnings, and ranks eighth all-time on France’s list.

Harman, a native of Reno, Nevada, has a long list of tournament accomplishments, including more than $2.7 million in earnings, two WPT final tables, 12 WSOP final tables, and was also the first woman to win multiple bracelets in open events.

Juanda is a 44-year-old Indonesian-born poker player who has amassed more than $17 million in tournament winnings, including five gold bracelets, and an EPT title, among other tournament victories.

Mortensen, the 2001 WSOP Main Event champion, has won more money on the World Poker Tour than any other player in history. His almost $6.8 million in WPT earnings, combined with over $3.1 million in WSOP earnings and assorted other cashes put his career earnings at almost $12 million.

Italy’s Pescatori captured two gold bracelets this summer, pushing his lifetime earnings up over the $4 million mark to go along with his four gold bracelets. Matt Savage, on the other hand, may be a non-player, but this 46-year-old tournament director is known for tirelessly advocating for standardizing tournament rules and has also been one of the foremost innovators in terms of tournament offerings and formats.

Ulliott, who passed away from colon cancer last April, remains to be one of Britain’s most famous poker faces. There’s also Terry Rogers, known as Ireland’s godfather of poker, who is also credited with changing the face of sports betting in the country. Rogers passed away in 1999.

Now, it will be up to the 23 living Hall of Fame members and a 16-member media panel to determine who will be inducted into the exclusive club. Established in 1979, the Poker Hall of Fame currently has a total of 48 members.

The voters will have until Oct. 9 to cast their ballots. The 2015 Class of the Poker Hall of Fame will be inducted during the November Nine weekend in Las Vegas.