Home / Poker / Devilfish Misses Out on Poker Hall of Fame; Mortensen & Brunson Are In 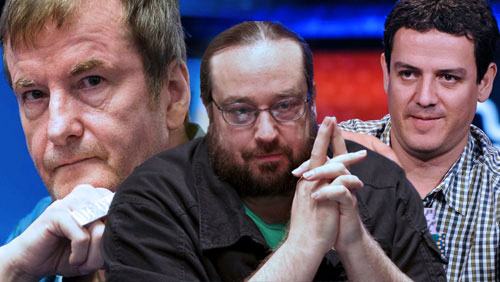 Dave ‘Devilfish’ Ulliott misses out on the Poker Hall of Fame for the second successive year as the voting process prefers Todd Brunson and Carlos Mortensen.

Fans of the late Dave ‘Devilfish’ Ulliott will be disappointed to hear that Todd Brunson and Carlos Mortensen are the newest members of the Poker Hall of Fame.

The general public and the 44-person panel (made up of living Poker Hall of Famers and a Blue Ribbon Media Panel) overlooked Devilfish, who made the cut for the second successive year after his death, and I don’t think we will see him book a spot in the next 10-years.

Do you know who Bobby Moore is?

If you don’t follow football I will give you a pass.

Pele once referred to Moore as the toughest defender he had ever played against. He was the captain of the 1966 England World Cup winning side, and when he passed away in 1993, West Ham retired the #6 jersey in his honour.

Do you know who Dylan Tombides is?

Tombides was a 20-year old on the books of the Premier League side West Ham United when he died of cancer. In honour of his death, despite only making one senior appearance for the club, they retired his #38 shirt.

Fans of football would have expected West Ham to retire Bobby Moore’s shirt. They wouldn’t have expected them to do the same for Tombides. But they did it because it was the right thing to do. It was an unusual circumstance. And it warranted an out of the box response. And the same was true of the Devilfish in the year of his death.

I might be wrong, but I don’t remember Devilfish making the Poker Hall of Fame shortlist before his death, and it’s for this reason that I don’t feel he will make it into the Hall for another decade.

The Poker Hall of Fame reminds me of wrestling when I grew up. I used to watch Saint & Greavsie followed by World of Sport. Big Daddy, Giant Haystacks, Kendo Nagasaki, Dave ‘Fit’ Finlay and Princess Paula were my heroes. Unbeknown to me, there was this slightly larger federation known as the World Wrestling Federation (WWF) in the States with the likes of Hulk Hogan, Andre the Giant, and Macho Man Randy Savage the main draws.

Had there been a global Wrestling Hall of Fame at that time I would have voted for someone I had seen in World of Sport. I didn’t have the ability to watch WWF on TV. The Americans would have piled on Hulk Hogan. I doubt they would have ever heard of Big Daddy.

It was the same with poker.

I grew up watching Late Night Poker, and that’s why the Devilfish will always have a place in my heart. I didn’t like the way he conducted his business off the tables. I wouldn’t call him a role model. But he was the reason that I, and thousands of others, got into poker over this side of the pond.

Unfortunately, just like Thor Hansen made the short list when diagnosed with terminal cancer and was then eventually dropped the same will happen to Devilfish, and that’s a shame.

Both Mortensen and Brunson enter the Hall with a number of ‘firsts’ behind them. Mortensen becomes the first European to make it into the Hall of Fame, but he was always going to be the man to break the back of that travesty. Mortensen is a phenom on the World Poker Tour (WPT), a show that would have been the gateway drug of choice for many American players. He is the leading all-time money earner on that tour and the only player to win both the World Series of Poker (WSOP) Main Event and the WPT World Championships.

Todd and Doyle Brunson become the first father-son team to make it to the Poker Hall of Fame. Brunson does have over $4.2m in live tournament earnings, has won a WSOP bracelet, and is a member of the Rome Emperors Global Poker League (GPL) franchise, but it’s his work at the live cash tables that has earned the 47-year old this coveted spot.

The pair will be honoured on Wednesday, October 26 at 7 pm, in Binion’s Gambling Hall.

The other members of the short list who will have to bide their time include Chris Bjorin, Humberto Brenes, Eli Elezra, Bruno Fitoussi, Chris Moneymaker, Max Pescatori, Matt Savage, and the man who kick started poker’s popularity in the UK, the Devilfish.

A new online Poker Hall of Fame pops up out of nowhere
Erik Gibbs
27 July 2018
.