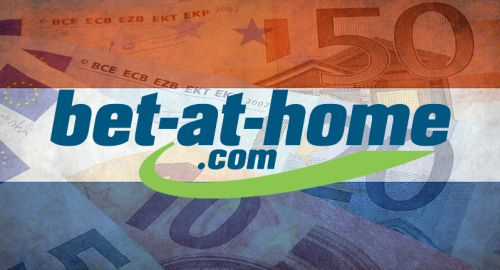 German online gambling operator Bet-at-home has been hit with €410k in financial penalties by Netherlands gaming regulators who say the company explicitly targeted Dutch punters without a local license.

On Tuesday, the Netherlands’ Kansspelautoriteit (KSA) gaming regulatory body announced that it had sanctioned the Frankfurt-listed Bet-at-home for a variety of offenses, including promoting its products in the Dutch language, incorporating the Dutch flag in its marketing and allowing its website to be accessed from Dutch IP addresses.

The KSA says it previously discussed these issues with the company in 2012 and 2014, but was informed in May 2017 of the existence of Bet-at-home adverts appearing on a television channel aimed at Netherlands residents. This prompted the regulator to open a new investigation into Bet-at-home’s activities last October.

As punishment, the KSA has handed two Bet-at-home subsidiaries a combined bill for €410k, which is only slightly shy of the record €480k penalty the KSA handed down in 2015 to a family of gambling sites that were deemed to be repeat offenders of the KSA’s edicts.

It remains to be seen whether the KSA can collect on this fine, as the regulator has run into difficulty collecting from companies that lack a physical presence in the Netherlands. However, with the company poised to (finally) liberalize its online market, failure to make good on such outstanding obligations could doom Bet-at-home’s chances of receiving a Dutch gambling license.

Monday saw the KSA welcome a working visit from Minister for Legal Protection Sander Dekker, who got an update on the KSA’s efforts to combat unauthorized gambling activity. The KSA has established a control database that tracks online activity in order to determine upstanding license holders from unlicensed rapscallions.