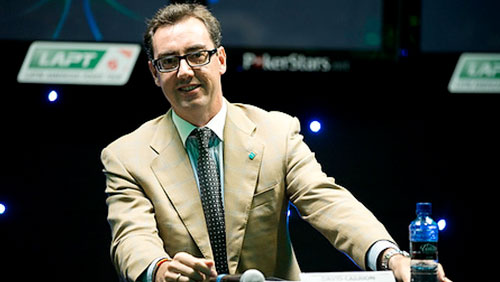 Lee Davy sits down with PokerStars’ Director of Marketing, David Carrion, for an update on the marketing and branding used to drive interest in the $25,000 buy-in PokerStars’ Player’s No-Limit Hold’em Championship.

It’s one thing to tell people you’re going to host the most ambitious $25,000 buy-in poker tournament the world has ever seen. It’s another thing entirely to make it happen.

I’m not saying for one minute that David Carrion shoulders the entire burden of this tournament, like the Titan, Atlas, but the title ‘Director of Marketing’ is a hint that he has a vested interest in the event doing well.

As a man who loves his role.

As a man who loves his company.

As a man who loves poker.

When Carrion and his team first began blowing balloons and firing party poppers in the air, the new idea flew out of the box alongside the promise to give away 300 Platinum Passes to the event worth $30,000 apiece.

Theoretically, PokerStars was giving players who would never dream of competing in a $25,000 buy-in event, the opportunity to do that. For a recreational player, this isn’t a Bucket List item; it’s a Bucket & Spade List item.

Five months into the marketing and branding campaign, PokerStars has done something unique; they have put creative control of Platinum Pass distribution to their Ambassadors.

Jason Somerville is giving an opportunity to the next Twitch sensation waiting in the wings. Jamie Staples wants someone to make a life-changing breakthrough in the ‘Ultimate Sweat.’ Liv Boeree and Igor Kurganov wish to find and reward the most intelligent poker players out there.

It all makes sense to me.

But does it work?

I put my finger on David Carrion’s pulse, and it seemed to be on point.

You are approaching the midway point in your 300 Platinum Pass Promotion, how do the people involved in the promotion feel?

As time progresses, more people understand the proposition of the PSPC. All the winners begin to realise how big of a deal it is when they get their first phone call from us to follow up with them after winning a pass. It is taking off. All the qualifiers to date are thrilled and super excited, and so are we. We’re very happy to see that people are talking about it, people want to qualify for it, and people want to play it.

The value proposition is strong and the paths to qualify are broad. We believe we are making it really accessible and possible for a variety of players to play in the biggest game of their lives. There is hype, and there is awareness. The anticipation is building, so we are on track!

It is hard to say what we are missing at this stage, as it is too early. We are trying many different things in terms of delivering the different paths to qualify, so, for now, we are frankly quite happy.

Why does the world need the PSPC?

I’m not sure if the world needs one, but certainly, PokerStars wants one! We are doing this because we want to have a tournament that is different. Poker is a great equaliser; it appeals to basic humanity by bringing people from around the world together to play.

We want to present a high stakes game that creates drama and tension to amplify the excitement and the thrill of the game. At the same time, we want to make it accessible so that all sorts of poker fans, players and pros can come together and play for life-changing amounts of money. We want to do this in a fantastic destination, and with the highest possible value for all involved.

I think there is room for this in the poker scene and I think it represents our passion for the game. Most importantly, it delivers on our intention to focus on the player. We want this to be the players’ tournament.

Why you? Why now?

Us? I don’t know, because we want to continue to develop the game of poker and our brand in a way that we believe is authentic and appeals to our values. Why now? Because we see it as an opportunity to expand on our current live poker proposition.

How will you put on this show better than anyone else?

The value is there. The location is good, and we have a proven record of customer satisfaction in Atlantis. We are not aiming for better than anyone else; we are aiming for great on our terms.

What is PokerStars’ core competence and how is it showing up in the PSPC promotion?

We take pride in creating the ultimate in online poker excitement and thrill. We have the most reliable, safe and secure playing platform. We have the biggest and richest tournaments, and we have a strong focus on live poker. I think PSPC is a proposition to deliver on these and enable poker players to play for big money, have a sound and safe experience and be part of something bigger than any of us.

What’s the thinking behind giving your ambassadors creative control over the issue of some of the passes?

Community reach. A part of this is to make it accessible and inclusive. We want to bring it closer to the poker community at all levels.

Idris Mootee said in the 60-Minute Brand Strategist – Companies need to understand that their products are less important than their stories – give me an example of some of the consistent stories that PokerStars extols in its branding that’s more important than the PSPC, and how do those stories make the PSPC brand even better?

Our story is that of enabling people around the world to come together to play a game they love and enjoy, and which at the same time can change their lives with life-changing amounts of money.

We’ve created many such stories over the years, in online and live poker, at all stakes and game types. We have enabled relationships and friendships that will last forever, bringing the poker community together, dignifying the game of poker, sportifying its image, validating its acceptance and helping everyone involved with it to enjoy a better experience with poker as a result. We love the game and PSPC is a manifestation of our passion for poker.

What promises are you making with the PSPC?

A very personal poker experience that can be life-changing for players and will be incredibly rewarding and entertaining to follow.

If you could transport into the future 5-years, what will you be very unhappy about if you saw that ‘x’, ‘y’ an ‘z’ didn’t happen at the PSPC?

How does the PSPC make you feel?

Incredibly excited, happy, and more in love with poker than ever.