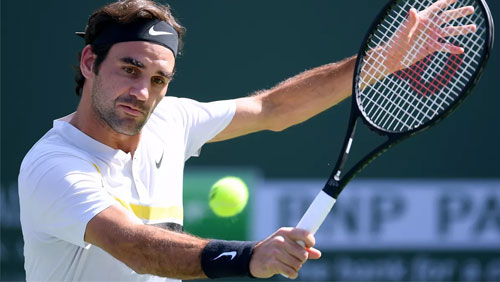 The most prestigious of tennis’ four Grand Slam championships is Wimbledon, and it’s the only major played on grass – a playing surface rather unfamiliar to many tennis players who grew up

in the United States or Canada. This year’s tournament in London begins on July 2 and runs through July 15, the date of the men’s singles final. The betting favorite for the men is Roger Federer at +150.

Federer has won 20 Grand Slam tournaments overall, most in history. So he not only could be considered the greatest player in history but also the best on grass as last year Federer won a record eighth Wimbledon title, breaking a tie with American Pete Sampras in the Open era. Federer routed Croatia’s Marin Cilic 6-3, 6-1, 6-4 for his first Wimbledon title since 2012.

At age 36, Federer now carefully plans his playing schedule. Clay is his worst surface by far so he skipped the French Open and the entire clay-court season again this year to get healthy and better prepared for Wimbledon. The Swiss legend had been No. 1 in the world rankings but lost that to Rafael Nadal on Monday after Federer was stunned in the final of the grass-court Gerry Weber Open in Halle.

Federer, who before this month hadn’t played a tournament since Miami in March, had won that tournament nine times previously. If he had won in Halle, Federer would be going for career singles title No. 100 at Wimbledon, but now that magic number will have to wait. Federer has a 91-11 match record in his career at Wimbledon.

Nadal is +500 to add a third Wimbledon title; he won in 2008  and 2010. The Spaniard’s last final there was a four-set loss in 2011 to Novak Djokovic. Of course, Nadal is the king of clay and recently won his record 11th French Open title.

Djokovic, the former No. 1, is +650. He has won Wimbledon three times, last in 2015 when he beat Federer in a four-set final. Djokovic has been in a slump for more than a year – he’s 17th in the world – but did just reach the final for the warm-up Fever-Tree Championships, blowing a match point and losing to Cilic.

One interesting name is another former No. 1 and two-time Wimbledon champion Andy Murray (+900), with the Scotsman always the crowd favorite in London. As of this writing, Murray has played just two competitive matches since last year’s Wimbledon due to hip surgery and has been supplanted as British No. 1 by Kyle Edmund.

Murray is way down at No. 156 so he won’t be seeded at Wimbledon, meaning theoretically he could be drawn against someone like Federer or Nadal in Round 1. Wimbledon’s seedings are calculated differently than the other Grand Slams, but Murray isn’t expected to be one of the 32 seeds. The draw is Friday.