Home / Business / Where have all the illegal Chinese World Cup bookies gone? 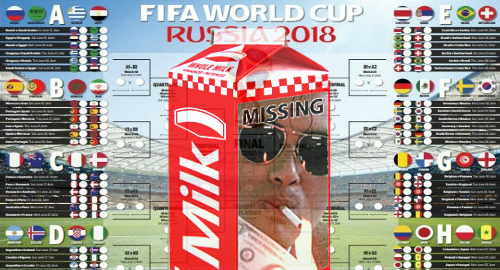 Are China’s illegal sports betting operators getting better at hiding their activities or are local police getting worse at catching them in the act?

On Monday, a Macau Judiciary Police (PJ) spokesperson told the Macau News Agency that the PJ have yet to make a single illegal sports betting arrest, despite the 2018 FIFA World Cup tournament getting almost into the knockout stage by now.

The spokesperson indicated that the PJ ramped up their detection and enforcement protocols as they do for every major quadrennial football extravaganza and would continue to carry out their inspections through to the end of this World Cup. It’s just that they haven’t caught anyone yet.

By this stage of the 2014 World Cup, Macau police had busted what may have been the largest illegal sports betting operation to have ever set up shop in the special administrative region of China. That betting ring, which was linked to online betting operator/high-stakes poker player Paul Phua, reportedly handled HKD5b (US$645m) worth of World Cup wagers in just the first week of the tournament.

Come to think of it, while police forces across Asia have been busy handcuffing bookies and punters alike, mainland China’s notoriously strict authorities have also been curiously bereft of illegal betting scalps. China’s state-run media has been forced to settle for publicly scolding unapproved online sports lottery operators.

So is this the calm before the storm? Have we jinxed the situation simply by mentioning it? Or is Beijing simply too focused on figuring out ways to apply tariffs on Donald Trump’s particular brand of hair dye — Pee-Pee Yellow #4, in case you were wondering — to worry about illegal wagering? In the immortal words of Bart Simpson: What happened to you, China? You used to be cool.

#FAIL
Meanwhile, a word of warning to fans of China’s official sports lottery products. If you win, don’t show off by posting your winning ticket to social media, as a woman from Shaanxi province discovered.

According to local media, the woman stood to collect RMB4k (US$608) after correctly predicting the outcome of the World Cup opener between Russia and Saudi Arabia. Elated, she posted photos of her winning ticket on WeChat.

However, when she went down to a local shop to collect her winnings the following day, she discovered that someone else had already claimed the loot by providing the shop with the ticket’s distinct numeric code. China’s lottery rules allow players to claim any ticket worth less than RMB10k without presenting the physical ticket. Can’t resist pointing out that this would never happened with a respectable illegal bookmaker who knows all of his or her customers.