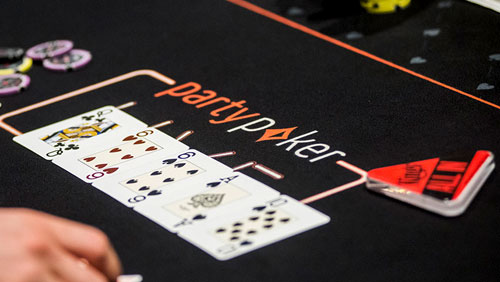 partypoker has joined the EU Shared Liquidity Online Poker Market fun after merging both the French and Spanish markets on Monday, immediately putting Bertrand ‘ElkY’ Grospellier to work with a meaty bounty on his head.

ElkY is about to earn his corn.

Four months after PokerStars entered the EU Shared Liquidity Online Poker Market, banging on its chest like King Kong, along comes partypoker like a deer running away from a hunter.

partypoker merged French and Spanish player pools on Monday. To celebrate the new union, the French will see a doubling of their multi-table tournament (MTT) offering, and both get to see what all the MILLIONS fuss it about. The Spaniards had a new software upgrade in April bringing them up to the same standard as the .com network.

The newly merged market will see €1m in guarantees on offer weekly with €600,000 guaranteed in the Progressive Knockout MTTs (PKO) that seem to be having a more significant impact on the world than global warming.

Last night, players on partypoker’s new .eu network players received a treat. A €109 buy-in PKO event dubbed The Main Event granted one $5,300 seat to the MILLIONS Online event for knocking out Bertrand “ElkY” Grospellier. You may remember that partypoker signed ElkY to spearhead the promotional work of the eu. site after PokerStars kicked him out of their car door. You can expect a Spanish player to join the largest ambassadorial tribe in the world in due course.

According to Haley Hintze over at Flushdraw, there’s more to this merger than meets these almond-shaped eyes. Two more sites owned by GVC Holdings, B.E.S SAS (a bwin subsidiary) and Pari Mutuel Urbain (PMU) will also join the merged network. It will be the first time that PMU has flashed a thigh in Spain.

According to a report in CardsChat, the EU Shared Liquidity Market is like finding an oil well in your backyard.

Q1 figures released this week from the Spanish Regulator Dirección General de Ordenación del Juego (DGOJ) noted that total revenue for online gaming in Spain was €163.3m, +28% year-on-year (YoY). Sports betting accounted for over half of that leap (€81.7m) a 15.9% increase YoY, and poker chewed up €21.5m – cash game revenue was up 30% to €8.4m, and tournament revenue was up 50.2% to €13m. In total, you’re looking at 5% growth YoY for the Spanish poker market.

Portuguese poker revenue was up 27% in the first week.

888Poker and Winamax, it’s time to go all Hulk Hogan, rip off those t-shirts and start flexing those EU guns.